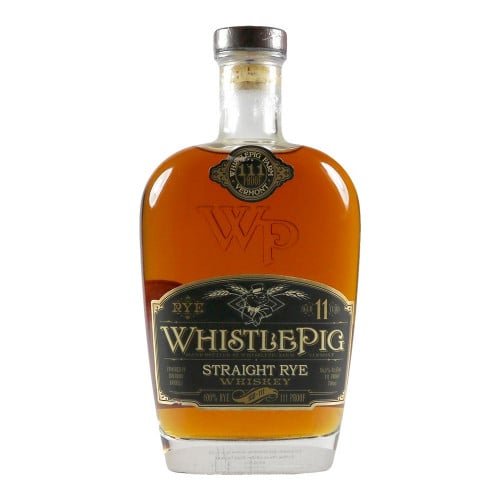 WhistlePig 111 Limited Edition Special Release Straight Rye Whiskey is the older companion to WhistlePig Straight Rye Whiskey. The whiskey is made from 100% rye grains. "Rye is the brat of whiskey grains," says Pickerell. "The higher the percent rye you get, the worse it behaves. It gets sticky. It foams. A lot of my colleagues laugh at me for persisting to work with 100% rye because the nuisance level of going from 95% to 100% is unbelievable. Most people stop at 95%. We go ahead and push the envelope and make it 100%."

After the rye is distilled, it is aged for eleven years — one year longer than WhistlePig Rye — in a combination of new American oak and second-use bourbon casks. The maturation process tames the spicy flavors of the rye, and contributes notes of soft, creamy vanilla, cinnamon, honey and oak to the whiskey. After aging, WhistlePig 111 Whiskey is brought to 111 proof and bottled by hand at WhistlePig Farm in Vermont.

WhistlePig 111 Limited Edition Special Release Straight Rye Whiskey has an aroma of intense wood, rye spices and ginger. The aroma opens up to notes of cinnamon, honey and oak on the palate, which are well-balanced by sweet notes of vanilla, buttery biscuits and caramel. The long, clean finish ends with touches of butterscotch and spicy rye. WhistlePig 111 Whiskey was named the Best Rye Whiskey (8 Years and Over) at the 2013 World Whiskies Awards.

Aroma of intense wood, rye spices and ginger. Notes of cinnamon, honey and oak on the palate, which are well-balanced by sweet notes of vanilla, buttery biscuits and caramel. Rich, chewy body. Long, clean finish ends with touches of butterscotch and spicy rye.