Size750mL Proof86 (43% ABV)
The innovators at WhistlePig loaded an 18-wheeler with casks of their whiskey. These then went on a 6,000-mile trip, during which they were being finished in casks from both the Firestone Walker brewery and Jordan winery.
Notify me when this product is back in stock. 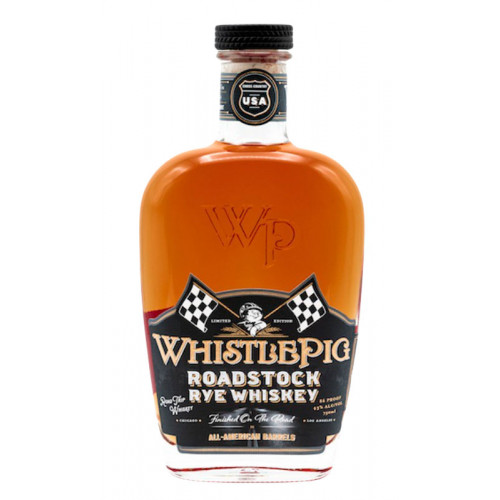 WhistlePig has been known for using innovative finishing methods and the Roadstock Rye Whiskey might just be the finest such example. It started with barrels of their whiskey from their farmhouse distillery in Shoreham, Vermont. Half of these were left in their original virgin oak barrels, the rest were transferred into casks from Jordan Winery that used to hold a Bordeaux blend. All of them were then loaded onto a semi-trailer that went on a road trip from Chicago to Los Angeles via Route 66. They made a stop at the Firestone Walker Brewing Company where the balance of whiskey was transferred into Imperial Stout, Imperial Blonde Ale, and Experimental Ale barrels to be finished on their way back to Vermont.

After 6,000 miles on the road, the 18-wheeler unloaded the casks and the distillery team went about blending it into Roadstock Rye Whiskey, corked with a miniature rubber tire. The unique 86-proof spirit has notes of raspberry jam, brown sugar, and toasted cedar.

The nose opens with fruity aromas and raspberry jam. You'll find rye spice on the palate along with brown sugar, caramel, toasted cedar, and fruity & tannic red wine notes. The finish is smooth and long with lingering notes.