$83.99
Caskers Rewards members earn up to 4 store points back when buying this bottle.

Size750mL Proof119.6 (59.8% ABV) - may vary
Before even hitting the shelves this exceptional rye received “Best in Category,” at the San Francisco World Spirits Competition.
Notify me when this product is back in stock. 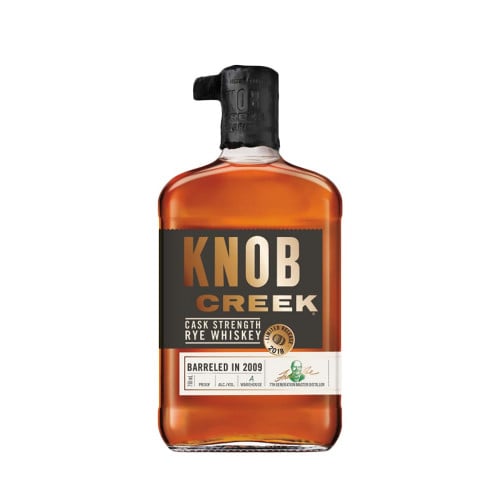 Following the end of the American Revolutionary War, Johannes Reginald Beam emigrated from Germany to the United States and eventually settled in Kentucky County. At the time, Kentucky County was still considered part of Virginia and was overseen by a military governor named John J. Bowman. After settling in Kentucky, Beam began harvesting corn and set forth a family tradition by distilling the excess grains he harvested into whiskey. Since then, seven generations of the Beam family have been involved in whiskey production for the eponymous company (the company is named after James Beam, who rescued it following Prohibition).

Knob Creek offers a solid core lineup of whiskeys and bourbons, all of which have made the brand one of the most popular labels on the market today. Rye Whiskey has made a massive comeback in the industry in recent years, and Knob Creek’s small batch rye is a hallmark emblem of the resurgence of this born again fermented grain whiskey. With its expansive notes of herbs bold rye and nuanced elements of oak, and undertones of vanilla, it's no wonder that this rye is one of the most famous whiskeys to date.

This exceptionally nuanced cask strength Knob Creek is one of the hitmakers. The whiskey was barreled in 2009, selected from Jim Beam’s legendary Warehouse A. Before its release, this exceptional rye received “Best in Category,” at the San Francisco World Spirits Competition.

The palate is dense with vanilla, laced with a nuttiness and sugary notes, and a distinctive Kentucky rye style. The finish is oaky, subtle with a slight bite.