Size750mL Proof90 (45% ABV)
This limited release from WhistlePig is the first-ever American rye whiskey finished in ex-Madeira casks.
Notify me when this product is back in stock. 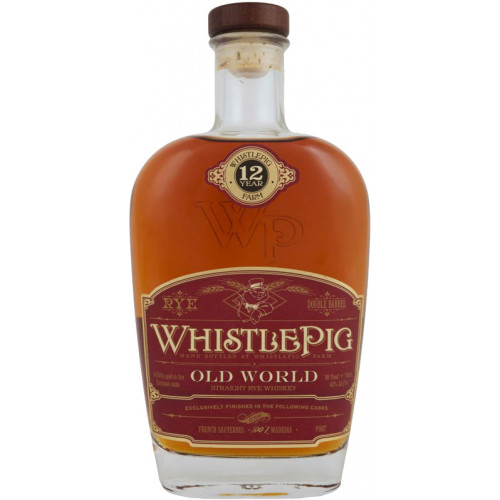 In 2006, a band of dedicated Rye enthusiasts purchased a 500-acre dairy farm in the rolling hills of Vermont's Champlain Valley. Today, the farm — which is being painstakingly restored to grow rye grains — is home to Master Distiller Dave Pickerell's magnum opus: WhistlePig Straight Rye Whiskey.

After leaving Maker's Mark, Pickerell embarked on a journey to find the perfect rye whiskey. "Rye, in its own essence, is just a brilliant grain," says Pickerell. "I wanted to do rye because it's America's historical whiskey." During the Revolutionary War, English blockades of American ports prevented the colonists from purchasing molasses used to make rum. As a result, American distillers, including George Washington, started making rye whiskey.

Pickerell completed his quest to find the perfect Rye with WhistlePig Straight Rye Whiskey, which has already received a number of accolades: it received a perfect five out of five stars from F. Paul Pacault's Spirit Journal, it earned a score of 96 points from Wine Enthusiast (the highest score a rye whiskey has ever scored), Details Magazine called it "America's Best New Whiskey" and it was named among the top five whiskeys of the year by The Wall Street Journal.

Now, through WhistlePig’s The Old World Series, Pickerell pays homage to the fine Scotch and winemakers of the Old World by using various types of European casks to finish his rye. WhistlePig The Old World Series: Madeira Finish Rye Whiskey begins as a 12 year old, 95% rye whiskey distilled at MGP Distillery in Lawrenceburg Indiana. Once it reaches its new home at the WhistlePig Distillery in Vermont, Pickerell finishes the whiskey for three-to-six weeks in barrels that previously contained Madeira, a fortified wine produced since the 17th century on the Portuguese islands of Madeira. WhistlePig The Old World Series: Madeira Finish Rye Whiskey is the first American rye whiskey to ever be finished in such casks.

This limited release is only available in small quantities in a select number of markets — be sure to pick up a bottle today!

Deep amber and copper color, along with aromas of peach, spearmint, caramel and oak. The palate expands into flavors of tropical fruits, cocoa and licorice, and the whiskey finishes long and smooth with hints of grapefruit, clove and honey.