Learn more
Size750mL Proof90 (45% ABV)
Made in collaboration with Chef Edward Lee of 610 Magnolia and Milkwood restaurants in Louisville, Jefferson's Chef Collaboration Straight Whiskey pays homage to the spirits Jefferson distilled over two centuries ago.
Notify me when this product is back in stock.

This product is available in: NV, NY Unfortunately, we can't ship to PO Boxes and APO addresses. 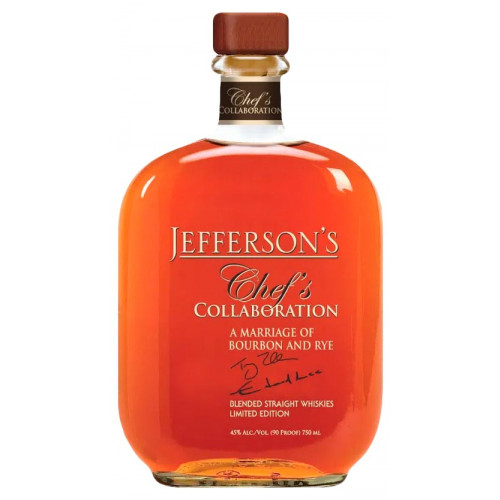 Made in collaboration with Chef Edward Lee of 610 Magnolia and Milkwood restaurants in Louisville, Jefferson's Chef Collaboration Straight Whiskey pays homage to the spirits Jefferson distilled over two centuries ago. "We started to think about what foods would pair well with bourbon," says Trey Zoeller, Jefferson's founder and master blender. "When we started to think about pairing whiskey with some dishes from Chef Lee's cookbook — pork dishes, spicier dishes, and his fried chicken particularly — it really came together."

Crafted from a blend of straight bourbon and rye whiskies, Jefferson's Chef Collaboration is the ideal combination of fruit flavors and rye spice at the end. It has an aroma of cherry, dried citrus, and oak that gives way to notes of buttered biscuits, peaches, and tart apples on the palate. Subtle touches of rye bread and spicy oak tannins linger and lead to a finish accented by touches of citrus and cloves.

We have only a handful of bottles of this whiskey available. Pick one up today!

Aroma of cherry, dried citrus and oak that gives way to notes of buttered biscuits, peaches and tart apples on the palate. Subtle touches of rye bread and spicy oak tannins linger, and lead to a finish accented by touches of citrus and cloves.