Learn more
Size2250mL Proof86 (43% ABV) *Please note that the ABV of this bottle may vary
This stunning WhistlePig set is a special triple bundle of triple terroir, featuring each step of the Farmstock journey.
Notify me when this product is back in stock. 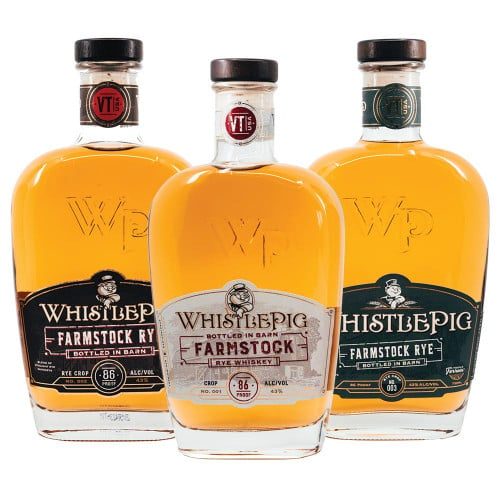 WhistlePig aims to restore America’s original spirit as the signature drink of the nation. Vermont happens to be home to rye production since colonial days. And one of the many goals of the distillery is to ultimately produce a Vermont Estate whiskey. This special WhistlePig set is a triple bundle of triple terroir, featuring each step of the Farmstock journey.

Their Crop No. 001 expression is a marriage of untamed contours and bold flavors of their youthful Estate Whiskey, with the rich flavors of their best five to six year ryes. The blend is topped off with their 12 Year “Old World” whiskey. With notes of oak, vanilla baking spices and citrus, WhistlePig FarmStock Rye Crop No. 001 is quite a step in the visionary farm-to-bottle whiskey industry in the U.S. FarmStock Rye Crop 001 was the first of their Triple Terroir Whiskeys - a historic step in realizing our vision of creating a true farm-to-bottle whiskey. It is the manifestation of the dream that launched the company: to produce the finest whiskey in the world from our Vermont farm.

Rye Crop No. 002 marries the untamed contours and boldness of their estate whiskey, which only youth can provide, with the richness of their best six year rye, topped off with the splendor of their 10 year whiskey.

FarmStock Rye Crop 003 is the third release of their annual Triple Terroir Whiskey - created from our rye grain, distilled and proofed with their own water, and aged in their custom Vermont White Oak. This year’s release is a historical step for WhistlePig, the first ever majority WhistlePig Whiskey. Comprised of 52% of our 3-year-old Rye Whiskey, blended with 31% 6-year aged whiskey and 17% 10 year aged whiskey from Alberta, Canada.