Size750mL Proof113.2 (56.6% ABV)
Four Gate Whiskey Company’s Release #7, River Kelvin Rye, is the company’s first ever rye. This expression was made by blending barrels of 7-year-old Indiana straight rye whiskey, and is presented without barrel finishing. Bottled at 113.2 proof, this delicious fruit-forward and refreshing release is perfect for sipping.
Notify me when this product is back in stock. 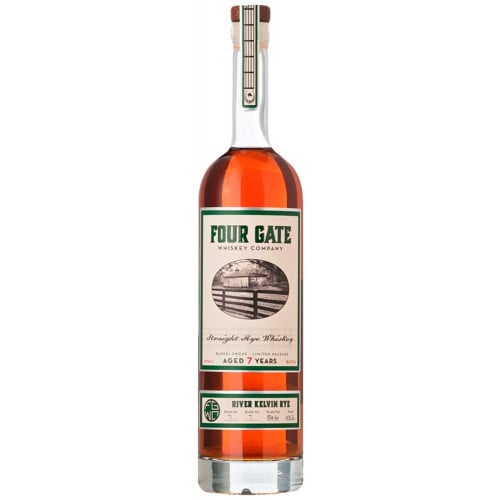 Release #7, River Kelvin Rye, is Four Gate Whiskey Company’s first ever rye. After they finally found straight rye that met their high standards, Straub and D’Antoni selected the best barrels of 7-year-old Indiana straight rye whiskey and blended them, creating a spicy and yet fruit-forward whiskey for a refreshing sip. This batch of the Indiana rye, made from a mash bill of 95% rye and 5% malted barley, is presented without barrel finishing and bottled at 113.2 proof. Even though the cooperage was not involved in the making of this release, Four Gate still paid homage to it with the name. Only 1,484 bottles of this delicious sipping whiskey were made.