Learn more
Size750mL Proof112.5 (56.25% ABV) *Please note that the ABV of this bottle may vary
Four Gate Whiskey Company’s Release #10, Split Stave™ by Kelvin, is a 7-year-old Indiana straight rye whiskey finished in innovative Split Stave™ casks, which were built by breaking down and reassembling two types of casks. A limited series of 2,439 bottles was produced at full cask strength of 112.5 proof.
Notify me when this product is back in stock. 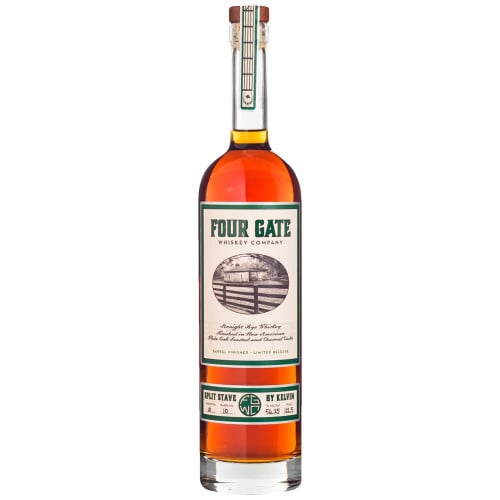 Four Gate Whiskey Company’s Release #10, Split Stave™ By Kelvin, is a straight rye whiskey finished in innovative Split Stave™ casks designed and produced exclusively for Four Gate by Kelvin Cooperage. The casks for this release were built by breaking down a series of medium-toasted casks and a series of #2 char casks and reassembling them into Split Stave™ casks with alternating toasted and charred staves. The result combines the marshmallow and crème brulee sweetness of toasted barrels with the smoky oak of a double-barrel. The underlying whiskey is 7-year-old straight rye whiskey distilled in Indiana to a mash bill of 95% rye and 5% malted barley. A limited series of 2,439 Bottles was produced at full cask strength of 112.5 proof.