Size750mL Proof109.6 (54.8% ABV)
This rye whiskey is a true collaboration: Master Distiller Drew Kulsveen provided rye from Willett Distillery, Master Distiller & Blender Rob Dietrich took care of the finishing in Madeira casks, while Metallica drummer Lars Ulrich helped create a unique playlist for the Black Noise process, a sonic treatment of the whiskey.
Notify me when this product is back in stock. 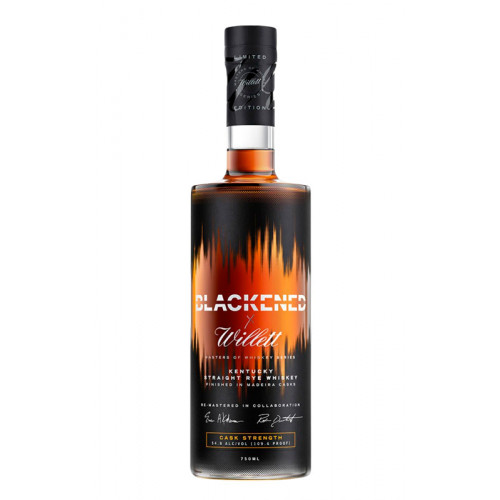 The behemoths of heavy metal Metallica entered the spirits business with Blackened American Whiskey, a blend of bourbon and rye whiskeys with an emphasis on the former. It was carefully selected by the late Master Distiller Dave Pickerell of WhistlePig fame, who is considered the founding father of craft distilling. Ever since he was a West Point student and later chemistry professor, Dave was interested in how sound could affect substances on a molecular level. They teamed up with Metallica and their long-time collaborators ― the innovating sound-engineering wizards Meyer Sound ― to create a special subwoofer that would transfer vibrations efficiently through the casks. They dubbed this proprietary process Black Noise, trademarked it, then proceeded to play tracks by Metallica ― chosen specifically for each batch by the band themselves ― to the whiskey.

The vibration helps each drop of liquid seep deeper into the wood, extracting flavors in the process, one heavy riff at a time. The result is a perfect balance of sweetness and rye spice, with additional fruity notes that come from finishing in black brandy casks. It's aged for more than 8 years and bottled at 90 proof.

Get this rocking rye whiskey today!

The nose opens with plenty of rye spice, vanilla, toffee, and sweet dark fruit notes. It's pleasantly sweet and equally spicy on the palate with baking spices, fruit, dark chocolate, tobacco, and nuts. The finish is oaky with fruit and hints of citrus.