Learn more
Size750mL Proof92 (46% ABV) *Please note that the ABV of this bottle may vary
The oldest rye whiskey in WhistlePig's range is on its 3rd edition. The mash bill consists of 79% rye, 15% malted rye, and 6% malted barley, where malting the grain makes the sugars easier to ferment. Having spent 18 years in virgin oak, it's a mature, nuanced, and elegant expression.
Notify me when this product is back in stock. 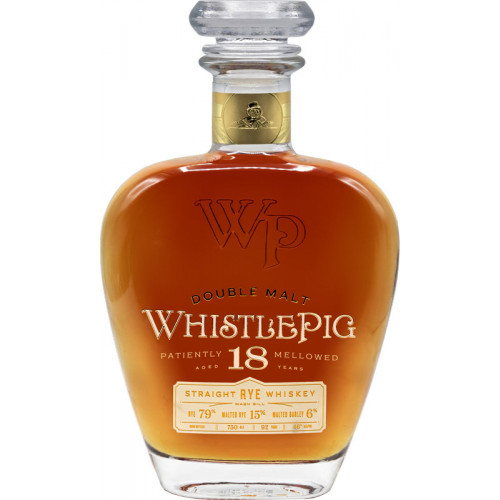 The WhistlePig Double Malt releases are their oldest rye whiskeys, clocking in at 18 years. Crafted with a mash bill of 79% rye, 15% malted rye, and 6% malted barley, the 3rd edition is bottled at 92 proof. Malting the grain opens it up, making the sugar within easily fermentable. This results in a floral and earthy spirit with an evolving palate that goes from soft to rich. The elegant bespoke glass topper adds to the elegance of this magnificent expression.

Grab a bottle of this 18-year-old rye whiskey today!

You'll find a balance of sweetness, oak, berries, and spice on the nose. The palate is spicy, fruity, and floral with oak and vanilla. The finish is satisfyingly long with the spice notes lingering pleasantly.