Size750mL Proof92 (46% ABV)
The second edition of the oldest WhistlePig rye is a beautiful 18-year-old that is crafted with a carefully thought out mash bill of 79% rye, 15% malted rye, and 6% malted barley for a spicy, oaky, earthy, and floral character.
Notify me when this product is back in stock. 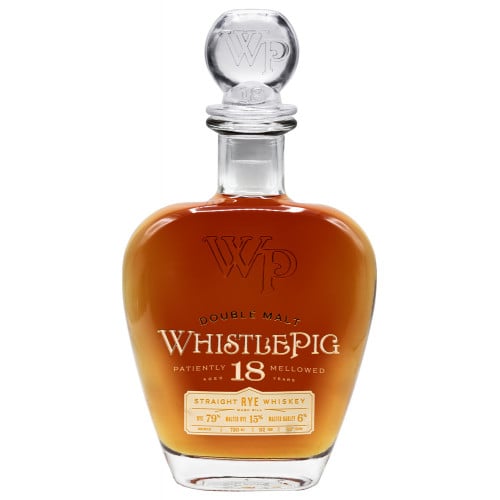 The WhistlePig 18 Year Old is their oldest rye whiskey. The 2nd Edition is crafted with a mash bill of 79% rye, 15% malted rye, and 6% malted barley. The recipe is meticulously thought out with the rye taking care of the bold and peppery spice notes, the malted rye bringing floral and earthy undertones, and the malted barley bringing its rich sweetness and toasted notes. The exquisite bottle comes from the renowned Vermont glassmaking workshop of Simon Pearce.

Grab a bottle of this premium rye whiskey today!

An oaky sweetness is on the nose with berries, nutmeg, and toasted oak. It's spicy on the palate with additional fruity and floral undertones, as well as vanilla and oak notes that develop over time. The finish is long and spicy.