Size750mL Proof92 Proof (46% ABV)
This 15-year-old rye was finished for six months in White Oak barrels harvested on the WhistlePig farm in Vermont.
Notify me when this product is back in stock. 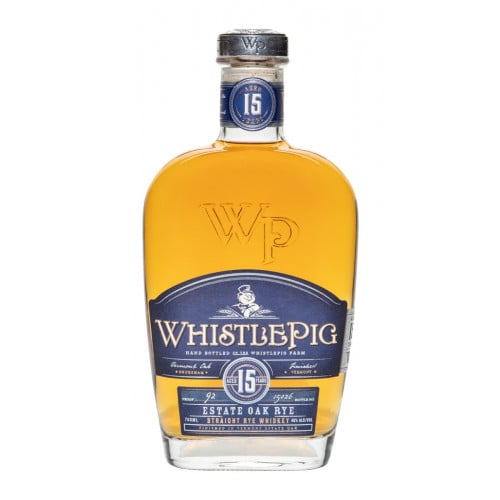 WhistlePig 15 Year Old Straight Rye Whiskey is a brand-new expression that marks the distillery’s oldest release to date. Aged first in new American oak casks, the whiskey is then “finished” for an additional six months in heavily-charred White Oak harvested on Bhakta’s farm in Vermont (Due to harsh winters and a shorter growing season, these trees possess a denser wood grain, imparting a nuanced and distinct flavor into the rye).

As a result, WhistlePig 15 Year Old Straight Rye Whiskey has an aroma of roasted chestnuts, along with plenty of oak and toffee. The palate is subtle and nuanced, with faint notes of lemon zest mingling beautifully with cloves, caramel, black pepper and leather. The finish is earthy and bittersweet, with bold notes of chocolate almonds rounding everything out.

Make sure to pick up a bottle today!

Aroma of roasted chestnuts, along with plenty of oak and toffee. The palate is subtle and nuanced, with faint notes of lemon zest mingling beautifully with cloves, caramel, black pepper and leather. The finish is earthy and bittersweet, with bold notes of chocolate almonds rounding everything out.