Caskers Rewards members earn up to 4 store points back when buying this bottle.
Size750mL Proof110.2 (55.1% ABV)
Distilled in Indiana from a mash bill of 95% rye and 5% malted barley, this is the 16th release by Four Gate. The same 7-year-old rye whiskey was released unfinished in 2020. This time it was finished in Apera sherry casks from Australia.
Notify me when this product is back in stock. 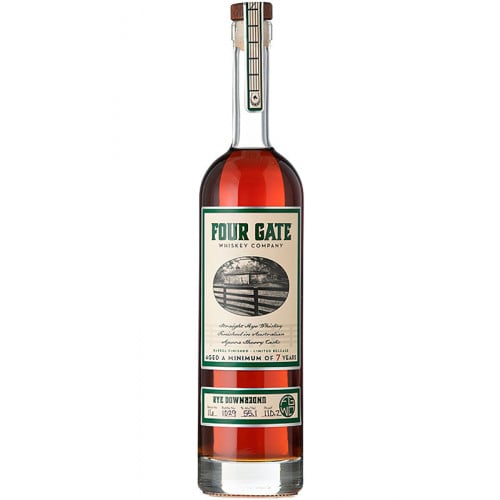 The 16th release is called Rye DownUnder. It's a 7-year-old rye whiskey that was distilled in Indiana from a mash bill of 95% rye and 5% malted barley. The base is the same whiskey that they released unfinished in 2020 as their first rye whiskey expression. This time, it was finished in Apera sherry casks that were imported from Australia by Kelvin Cooperage. The barrel-proof spirit was bottled at 110.2 proof and is limited to a scant 2,168 bottles.

It's a flavorful and full-bodied rye whiskey with a delicious balance of rye spice and sweet, fruity notes. The sherry finish contributes nutty notes as well as hints of dark fruit, culminating in a long and gently warming finish with lingering notes.