Size750mL Proof88 (44% ABV)
Marking the five year anniversary of their cult hit bar, founding duo Sean Muldoon and Jack McGarry have teamed up with Master Distiller, Darryl McNally to create a first for The Dead Rabbit: their very own Irish whiskey.
Notify me when this product is back in stock. 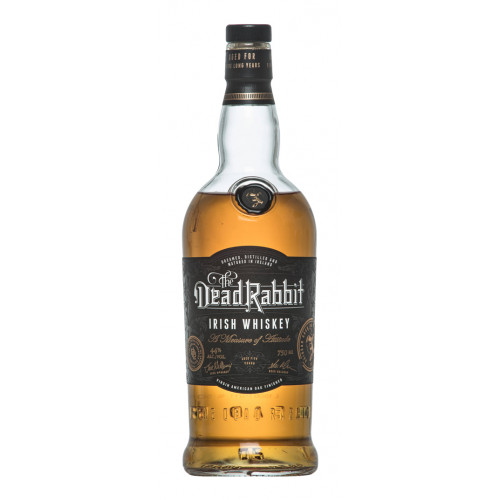 On February 12, 2013, Belfast born and bred, seasoned industry mavens Sean Muldoon and Jack McGarry opened The Dead Rabbit Bar in lower Manhattan. Three years later, it was voted the best drinking spot in the world. Five years later, the duo are on to a new venture: launching their very own Irish whiskey, in honor of the five-year anniversary of their cult hit New York bar.

The 2016 "World’s Best Bar" boasts the largest collection of Irish whiskey in North America. Their new whiskey is a commemorative new addition to the bars illustrious encyclopedic collection of spirits.

The Dead Rabbit Irish Whiskey is a collaboration with The Dublin Liberties Distillery's Master Distiller, Darryl McNally. It features a premium blend of Irish single malt and grain whiskeys aged in seasoned ex-bourbon casks for five years, before being finished in compact virgin American oak barrels.

This special blend is characterized by its light and aromatic profile with toasted oak notes and a hint of caramel. The palate has a deep rich character and a smooth, mellow feel, followed by a long finish with a subtle hint of vanilla.

The design of the bottle is a tribute to the notorious New York Irish street gang and its leader, bare-knuckle boxer and U.S. Congressman, John Morrissey. The vial is emblazoned with a seal illustrating an upside-down, dead rabbit, a nod to its infamous 19th-century namesake. Dead Rabbit Irish Whiskey marks the fifth anniversary of the famous bar, making its debut February 12, 2018.

Light and aromatic on the nose with toasted oak notes and a hint of caramel. The palate has a deep rich character and a smooth, mellow feel, followed by a long finish with a subtle hint of vanilla.

4.9 out of 5
(7 reviews)
Write a review
Real email address is required to social networks
Sign in
Login with Google
Login with Facebook
Or
We also recommend