Size750mL Proof86 (43% ABV)
The Whistler Irish Whiskey Oloroso Sherry Cask Finish is their signature blend of 35% single malt whiskey and 65% percent grain whiskeys – all matured in ex-bourbon casks for at least 4 years before marriage in Bodega Sherry Oloroso casks where they're finished for at least 1 year.
Notify me when this product is back in stock. 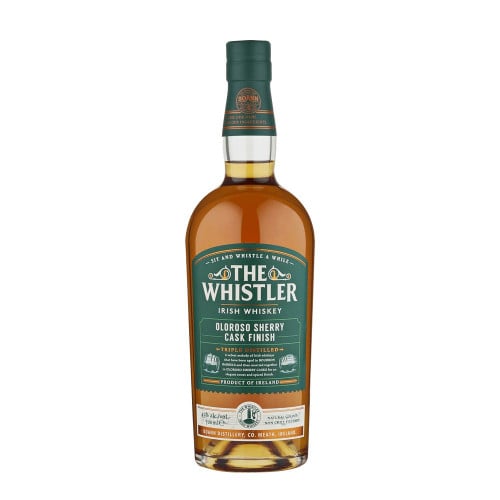 The Whistler Irish Whiskey Oloroso Sherry Cask Finish is their signature blend of 35% single malt whiskey and 65% percent grain whiskeys – all matured in ex-bourbon casks for at least 4 years before marriage in Bodega Sherry Oloroso casks where they're finished for at least 1 year. Triple distilled, this is an extra smooth dram that brings bergamot orange, nougat, and a hint of coconut, banana, and pear on the palate.

On the nose, there’s dry sherbet lemon, white grape, walnut nougat and a hint of tropical fruits. The palate is smooth and well-rounded with bergamot orange, nougat, and a hint of coconut, banana, and pear. The finish is sweet and lingering.