Size750mL Proof80 (40% ABV)
Only 202 bottles of this single malt, which was matured for 29 years, will ever be produced.
Notify me when this product is back in stock. 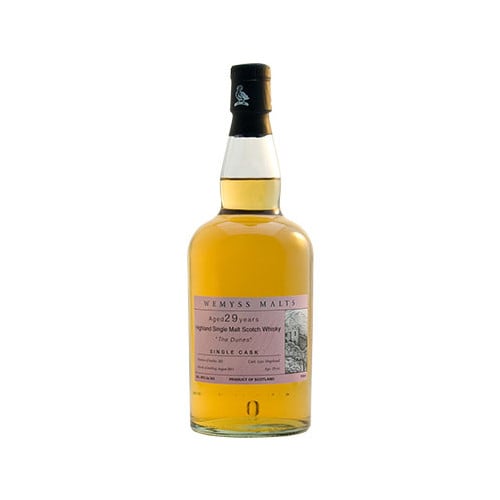 "Our family links to the whisky industry date back to 1824," says William Wemyss, the founder and CEO of Wemyss Malts, "when John Haig built his distillery on family land in Fife." Wemyss (pronounced "Weems") is the ancient Gaelic word for caves and stems from the rocky outcrop on which the Wemyss family home — Castle Wemyss — rests. Haig's distillery eventually became known as Cameron Bridge and in 1826, it became the first distillery to produce grain whisky using the column still method invented by Robert Stein.

Today, the Wemyss family expertly bottles some of the finest whiskies made across Scotland. "Our whiskies are chosen by a tasting panel," says Wemyss, "and the tasting panel comprises people who work in the business, members of the family, and most importantly, is chaired by Charlie MacLean who helps us select the industry's best whiskies to bottle under our brand."

MacLean, who has been writing about whisky since 1981, was trained in "the sensory evaluation of potable spirits" by the Scotch Whisky Research Institute in 1992. In addition to being a visiting lecturer at the Smithsonian Institution, he is also a Councillor of Clan Maclean and was elected Master of the Quaich (Quaich is derived from the Gaelic word meaning cup), one of the Scotch industry's highest accolades, in October 2009.

Wemyss The Dunes 29 Year Old Single Malt Single Cask Scotch Whisky was distilled at the Inchgower Distillery and matured for nearly three decades before being bottled from a single cask. Founded in 1871, the Inchgower Distillery is situated in the Speyside region of Scotland and its whisky is primarily used in blended scotches such as Johnnie Walker. In fact, only one percent of the whisky distilled at Inchgower is actually bottled and sold as single malt whisky.

Wemyss The Dunes 29 Year Old Single Malt Single Cask Scotch Whisky has a golden honey color that is surprisingly light for a 29-year old whisky. In addition, the whisky has an aroma of earthy minerals, oak and black pepper that gives way to notes of beef jerky, pulled pork and cloves on the palate. The finish is bold and slightly salty, with a touch of citrus.

Only 202 bottles of this single malt have ever been produced. Pick one up today!

Golden honey color. Aroma of earthy minerals, oak and black pepper. Notes of beef jerky, pulled pork and cloves on the palate. Finish is bold and slightly salty, with a touch of citrus.