Size750mL Proof92 (46% ABV)
Only 272 bottles of this single malt, which was matured for 30 years, will ever be produced.
Notify me when this product is back in stock. 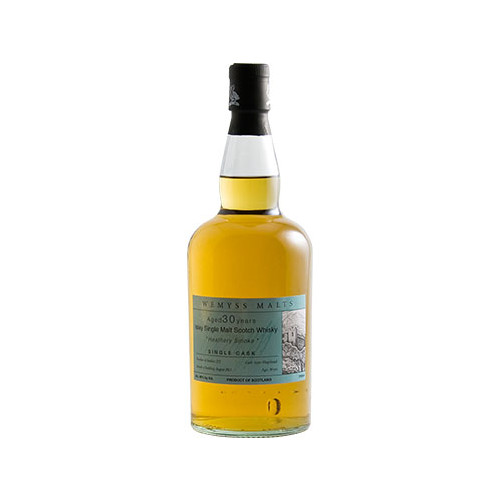 "Our family links to the whisky industry date back to 1824," says William Wemyss, the founder and CEO of Wemyss Malts, "when John Haig built his distillery on family land in Fife."Wemyss (pronounced "Weems") is the ancient Gaelic word for caves and stems from the rocky outcrop on which the Wemyss family home — Castle Wemyss — rests. Haig's distillery eventually became known as Cameron Bridge and in 1826, it became the first distillery to produce grain whisky using the column still method invented by Robert Stein.

Today, the Wemyss family expertly bottles some of the finest whiskies made across Scotland. "Our whiskies are chosen by a tasting panel," says Wemyss, "and the tasting panel comprises people who work in the business, members of the family, and most importantly, is chaired by Charlie MacLean who helps us select the industry's best whiskies to bottle under our brand."

Wemyss Heathery Smoke 30 Year Old Single Cask Scotch Whisky was distilled at the Caol Ila Distillery and matured for three decades in a single cask. Nestled in a hidden cove near Port Askaig, Caol Ila Distillery (pronounced "Cull Eela,") was founded in 1846 by Hector Henderson. It borrows its name (which means "The Sound of Islay"in ancient Gaelic) from the sea sweeping past its dramatic and almost hidden location — it is situated between a steep cliff and the eastern shores of the Sound of Islay. For over a century, small coal-fired boats known as puffers navigated the Sound and brought barley, coal and casks to the distillery. Although the puffers no longer exist, Caol Ila continues to distill whisky using locally malted barley, along with pure spring water sourced from Loch Nam Ban (the water travels through limestone and peat before reaching the distillery).

Wemyss Heathery Smoke 30 Year Old Single Cask Scotch Whisky has an aroma of mellow smoke, heathered honey and creamy vanilla. The aroma gives way to notes of burning embers, light citrus and a touch of peppers on the palate, and leads to a finish accented by hints of caramel, chilis and burnt smoke.

Only 272 bottles of this single malt have ever been produced. Pick one up today!

Aroma of mellow smoke, heathered honey and creamy vanilla. Notes of burning embers, light citrus and a touch of peppers on the palate. Finish accented by hints of caramel, chilis and burnt smoke.