Size750mL Proof94 (47% ABV)
Aged under the intense Kentucky sun, this single barrel bourbon is the product of 225 years of family experience.
Notify me when this product is back in stock. 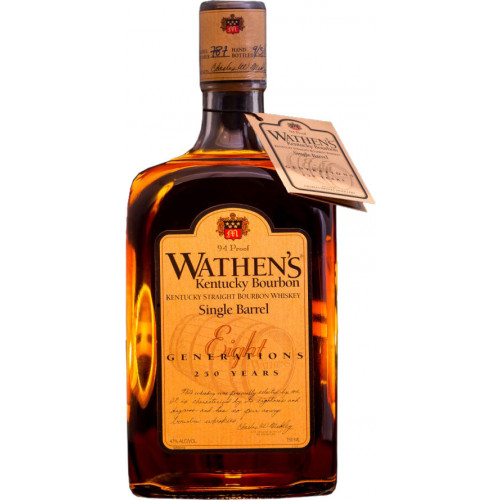 Situated along the banks of the Ohio River in Owensboro, Kentucky, the Medley Distilling Company is stewarded by Charles and Sam Medley, a father-and-son team who represent the seventh and eighth generation master distillers in their family. The Medley's roots run back to the birth of Kentucky bourbon; while Reverend Elijah Craig is usually credited with producing the first bourbon whiskey at his mill in Lebanon in 1789, the Medley's ancestors were distilling whiskey prior to that time in the adjacent county in Kentucky. In fact, except during the thirteen years during which distillation was outlawed in the United States, a member of the Medley family has been operating a distillery continuously since 1812.

Following the repeal of Prohibition in 1933, Thomas Aquinas Medley began distillation and maturation of a new bourbon in honor of his family's rich history. Thomas died shortly thereafter, but the Medley Distilling Company continued to produce Kentucky bourbon for the next five decades. Today, under the tutelage of Charles and Samuel Medley, the distillery continues to distill bourbon using the same recipes and techniques that the previous generations of Medleys perfected decades ago.

Wathen's Single Barrel Kentucky Straight Bourbon Whiskey is made from a mash of corn, rye and malted barley. After the grains have been harvested, they are milled and mashed before being fermented with an eight-generation old yeast strain (the unique strain of Medley Family yeast has been inherited by each generation of Medley's since the 19th century, and remains a closely-guarded family secret). Following fermentation, the wash is distilled through a copper-pot still before being aged in new, charred American oak casks under the Kentucky sun.

After the bourbon has matured for approximately eight years, Charles and Sam Medley taste each individual cask to determine when it is ripe for bottling. Since each bottle of Wathen's Single Barrel Bourbon is bottled from a single cask rather than being crafted from a batch of casks, each bottle of Wathen's is slightly different and entirely interesting.

Aroma of caramel, vanilla, honey, violet and milk chocolate. Notes of caramel, coffee and butterscotch dominate the palate, and give way to touches of figs, berries and dried fruits. Warming finish that has touches of creamy vanilla, buttered bread and oaky spices.