Size750mL Proof80 Proof (40% ABV)
A collaboration between award winning artist Drake, and Brent Hocking, this whiskey is a blend of hand selected 2, 3, and four year old bourbons, rich in rye. Bottled at a much lower 40% ABV, it’s a smoother and sweeter bourbon whiskey, a drink those who aren’t traditionally bourbon drinkers.
Notify me when this product is back in stock. 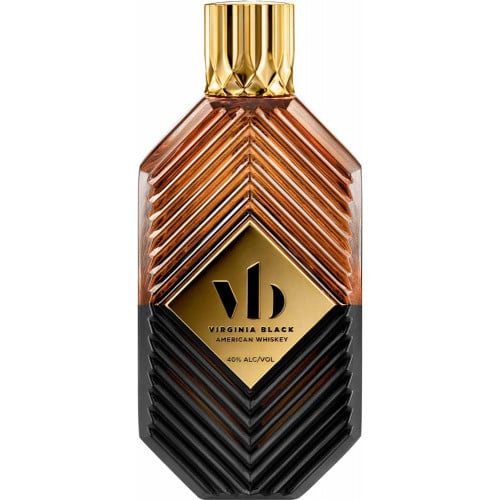 Released in 2016 Virginia Black is bottled and distilled at MGPI in Lawrenceburg, IN. The Whiskey is a blend of hand selected 2, 3, and four year old bourbons, rich in rye. Bottled at a much lower 40% ABV, it's a smoother, sweeter bourbon whiskey, an intentional effort to attract those who aren’t traditionally bourbon drinkers. It is bottled in a luxurious art-deco inspired glass, with elegant gold detail.

Get your bottle of Virginia Black today!

Brent Hocking, former mortgage banker, and current CEO of Virginia Black American whiskey, is an award-winning spirits producer best known for creating the original DeLeòn Tequila. Receiver of the Robb Report Spirit of the Year award winner three years in a row, and a back-to-back Grand Champion at the World Beverage Competition in Geneva, Switzerland, Hocking has a very reputable nose for liquor.

Born a preacher's son in Compton, California, Hocking is establishing a rep in the Hip Hop business, neither of which are strangers to the spirits industry. But the southern Cali mogul is cultivating new ties between the two with his eccentric "luxury with an edge" branding approach.

He launched two beverages associated with Hip-Hop Cash Kings, a signature series from Forbes magazine featuring "10 Years of Hip Hop Kings." After founding award-winning DeLeón tequila in 2009, it was sold to industry giant Diageo and rapper Diddy in 2013. Hocking's newest venture is Virginia Black whiskey, which is actually the first step into the Spirits world for his fellow collaborator, award-winning artist Drake, who is quite devoted and personally invested in the brand.
Explore all Virginia Black bottles >>