Learn more
Size750mL Proof99.2 (49.6% ABV) *Please note that the ABV of this bottle may vary
Crafted in collaboration with Revelry Brewing, this unique whiskey is a blend of 3 straight ryes: a 5-year-old, a 4-year-old double-barreled rye, and a double-barreled rye whiskey in chocolate malted porter beer barrels.
Notify me when this product is back in stock. 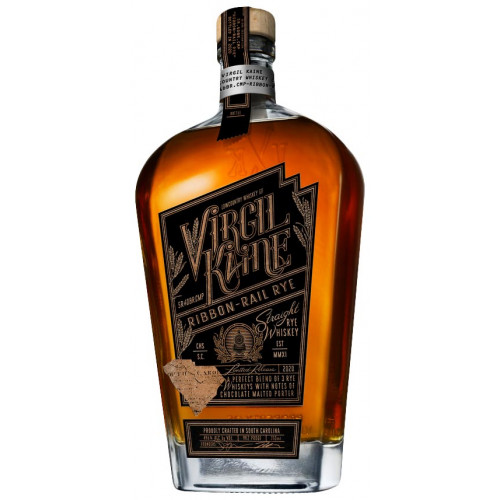 Virgil Kaine was founded by David Szlam and Ryan Meany, who decided to channel their culinary expertise into creating high-quality whiskey. Szlam got a degree at the California Culinary Academy's Le Cordon Bleau Culinary Program, working with several world-class chefs afterwards, which eventually led to him opening his own restaurant, Cordavi, in Charleston, South Carolina. The restaurant was named one of 20 best new restaurants by Esquire in 2006.

Szlam continued to challenge himself, leading to the creation of Virgil Kaine Ginger Infused Bourbon in 2011 and a partnership with another chef in 2013 in order to expand the new brand. This is where Ryan Meany comes in. With a bachelor's degree in marketing and a culinary arts degree from the Johnson & Wales University as well as plenty of culinary experience ― himself working with renowned chefs and opening the Burger Babies establishment as well ― the pair was a perfect match with a shared love of whiskey and common vision.

Legend has it that Virgil Kaine was a railway conductor during the Civil War era who built a still inside his train car, bootlegging at night. Once he was caught and shot, he figured out a way to take the edge off bourbon ― with a ginger infusion. While that's where the brand started out, Szlam and Meany have been channeling their expertise into several expressions, including ones involving infusion and maceration.

Virgil Kaine Ribbon-Rail is a limited-release whiskey that was crafted in collaboration with Revelry Brewing and combines 3 straight ryes: a 5-year-old, a 4-year-old double-barreled rye, and a double-barreled rye whiskey in chocolate malted porter beer barrels. The unique 99.2-proof blend balances spice with sweetness, with the added depth of cherry and chocolate notes.

The classic rye profile has baking spices, oak, and some green notes on the nose. There's the signature balance of sweet and spice on the palate, along with cherry and chocolate notes from the porter barrels. These last through the finish, where they are joined by oak.