This product is available in: CA, IL, ND, TX Unfortunately, we can't ship to PO Boxes and APO addresses.

Size750mL Proof100 (50% ABV)
This whiskey is handcrafted using a whiskey is distilled using an 11-step, 25-day process and a bespoke charcoal filtration method. It was named "1 of the Top Five Whiskeys in the World" by the Cigar & Spirits Magazine in 2018.
Notify me when this product is back in stock.

This product is available in: CA, IL, ND, TX Unfortunately, we can't ship to PO Boxes and APO addresses. 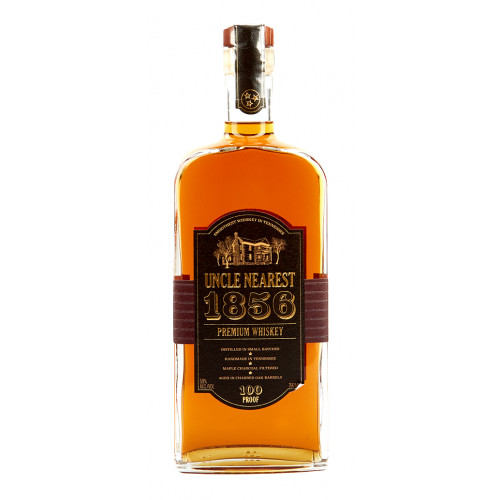 Uncle Nearest Premium Whiskey is inspired by the best whiskey-maker the world never knew, the first African-American master distiller on record in the United States, Nathan “Nearest” Green. Owned entirely by Uncle Nearest, Inc., The Uncle Nearest line includes a Premium Aged blend of 8-10YO, and 11YO Barrel Proof Single Barrel, and debuting at Tales of the Cocktail: a Small Batch whiskey hand-selected by the founders of Uncle Nearest with a blend curated by descendants of Nearest Green. Every expression is distilled, aged, bottled and hand-labeled in Tennessee.

A rich sweetness on the nose with charcoal and baking spice. The palate is rich and creamy with subtle notes of orchard fruits and sweetness followed by baking spice and a complex, smooth finish.