Learn more
Size750mL Proof92 (46% ABV) *Please note that the ABV of this bottle may vary
Aged for a decade in seasoned oak and finished in sherry, port and madeira casks, these Irish whiskies have each earned many accolades.
Notify me when this product is back in stock. 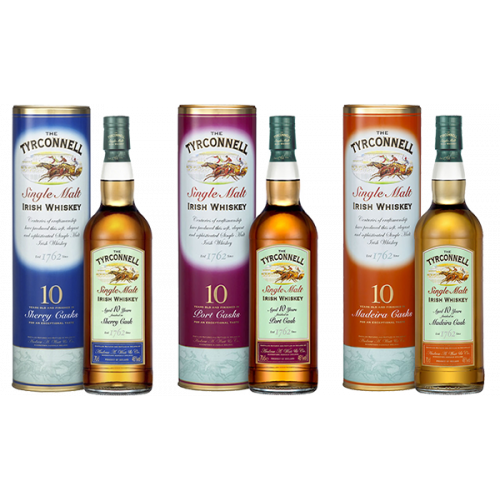 Following its slumber in the oak, The Tyrconnell Single Malt Port Cask Finish Whiskey is double-barreled, or finished, in used port casks, where it rests for another six to eight months. The port casks add complexity to the whiskey, and provide it with notes of cherries, stone fruits and dark chocolate. The Tyrconnell Single Malt Irish Whiskey Port Cask Finish earned a score of 92 points from Whisky Advocate and earned the Gold Medal at the San Francisco World Spirits Competition in 2011.

The Tyrconnell Sherry Cask Finish Whiskey is finished in used sherry casks for six to eight months. The sherry influence lends notes of raisins and honey to the whiskey, which are complemented by the whiskey's notes of tobacco, oak and cinnamon. The finish is soft and lingering, with hints of butterscotch and nutty dough. Tyrconnell Sherry Cask Finish Whiskey earned a score of 94 points from Wine Enthusiast Magazine in 2012 and 97 points from the Beverage Testing Institute.

The Tyrconnell Madeira Cask Finish Whiskey is finished in used madeira casks (madeira is a type of fortified Portuguese wine). The madeira casks add notes of sweet toffee, citrus and honey to the whiskey, and complement its notes of vanilla and caramel. The Tyrconnell Madeira Cask Finish Whiskey earned an astounding 98 points from the Beverage Testing Institute, which also gave it the Platinum Medal, calling it simply "superlative." The whiskey also earned the Gold Medal at the San Francisco World Spirits Competition in 2012.

Sherry: Notes of raisins and honey, which are complemented by notes of tobacco, oak and cinnamon. The finish is soft and lingering, with hints of butterscotch and nutty dough.