Size750mL Proof92 (46% ABV)
Double distilled and aged in ex-American oak bourbon barrels for 16 years, this distinctive single malt is filled with notes of melon, pear, vanilla and even coconut.
Notify me when this product is back in stock. 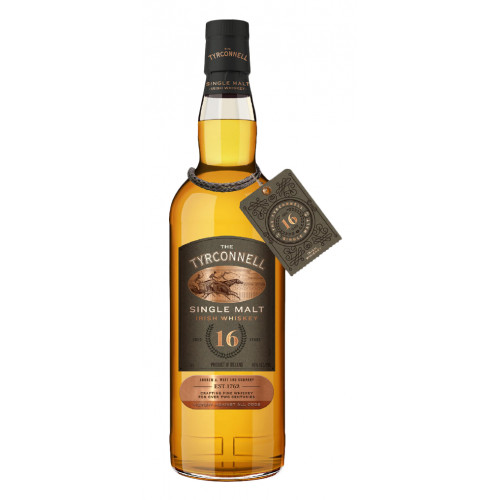 The Tyrconnell Single Malt Irish Whiskey is made using the finest Irish barley, which is steeped in pure spring water and allowed to germinate. Unlike many Irish distilleries, Cooley Distillery does not use any smoke during the malting process, resulting in a cleaner taste of the malt and barley. After the barley is malted and mashed, yeast is added to the wort in order to begin fermentation.

The wash is then double distilled through the distillery's copper pot stills — the stills' small size and long necks result in more contact between the whiskey and copper, and ultimately produce a more refined and layered spirit. Following distillation, the whiskey is matured for a decade in seasoned oak casks which are stored in a 200 year-old granite warehouse. The seasoned casks impart notes of vanilla and caramel to the whiskey, and add a hint of cinnamon. The Tyrconnell's 16-Year-Old Irish Whiskey, is aged in ex-American oak bourbon barrels. With notes of melon, candied pear, vanilla and coconut, this single malt is bottled at 46% ABV.

On the nose is plenty of fruit, melon, candied pear, vanilla custard and coconut. The palate is viscose with ample notes of fruit, with a final dose of almond before the long herbaceous finish.