Caskers Rewards members earn up to 4 store points back when buying this bottle.
Size750mL Proof115-128 (57.5%-64% ABV) - may vary
Taos Lightening is said to be the oldest spirit brand in America, dating back to 1820. The brand has been re-incarnated as Turley Mill. Produced in single barrel, cask strength, small batches.
Notify me when this product is back in stock. 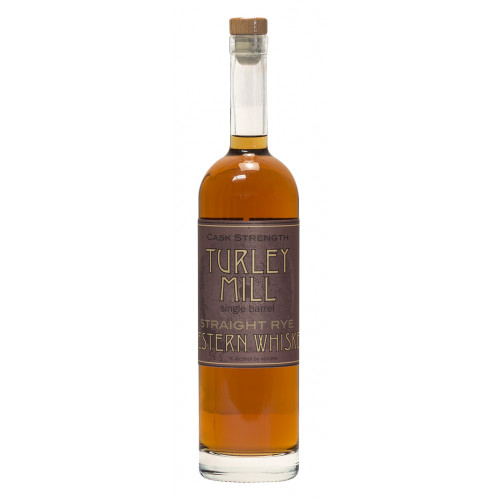 Taos Lightning is said to be the oldest spirit brand in America, originally distilled in 1820 by Simeon Turley of Arroyo Hondo, New Mexico. The whiskey was very popular among traders, Native Americans, and fur trappers. The spirit was sold in the Southwest until 1847 when Turley was killed during the Taos Pueblo Revolt.

Over a century and a half later, the name was resurrected by KGB Spirits, released as a cask strength version under the name Turley Mill. As their bestselling product from Los Luceros Destilaría, the initial offering of the two barrels, sold exclusively in Santa Fe and Taos, has since been sought after by both history buffs and whiskey connoisseurs.

Turley mill is crafted from a mash bill of 95% rye, and aged in new charred American oak barrels. The arid climate coupled with the elevation in New Mexico creates a unique aging process. This high rye single barrel Turley Mill expression is currently the brand's only cask strength offering, with an ABV of 115-128 proof.

Turley Mill is produced in small batches, with each cask hand selected from single barrels of either 4 and five-year-old whiskeys with a 95% rye mash bill. The whiskey is hand-filtered, bottled, numbered and dated. This strong rye has traditional notes of caramel, toffee, vanilla, baking spices, and oak. Enjoy this single barrel on the ice, with a splash of water, or neat (if you dare).

A nose of traditional caramel and toffee, a nice spice profile of cinnamon, clove and minty cocoa, and an elegant oak. Medium texture on the palate with dark burnt sugar and vanilla fudge upfront, more herbal tea with some sharp cinnamon bark, and a peppery oak and sweet tobacco in back. Oscillating citrus notes. Sweet on the finish with lingering notes of menthol and vanilla.