Size750mL Proof80 (40% ABV)
Tullamore DEW's signature blended Irish whiskey is first aged normally in ex-bourbon and ex-sherry casks. Then it is finished for 3 months in casks used to ferment their apple cider, making for a pleasantly fruity expression.
Notify me when this product is back in stock. 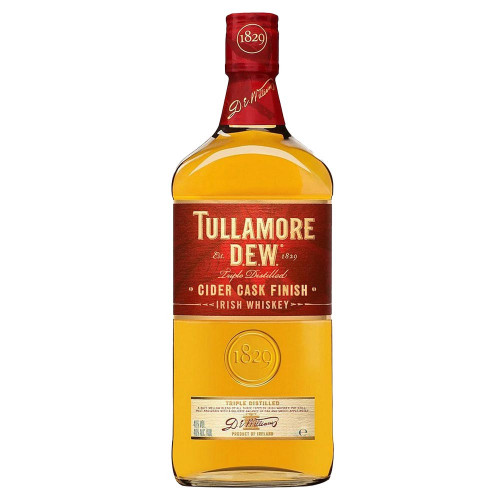 Tullamore DEW Irish Whiskey is made from three different grains, including malted barley, unmalted barley, and corn. Once the grains are harvested, they are milled and mashed with hot water before being fermented in wooden washbacks. During fermentation, the grains' sugars are converted into alcohol, creating a strong yet sour beer called wash. The wash is then triple distilled through three copper-pot stills: a wash still, a low wines still and a pot still. Through each distillation process, the alcohol content and flavors of the whiskey are intensified.

Tullamore Dew Cider Cask Finish is a fruity and light-bodied expression that brings their Irish whiskey with their small-batch cider. Freshly pressed Irish apple juice is fermented into cider in ex-bourbon oak casks. Their signature blended Irish whiskey, aged in ex-bourbon and ex-sherry casks, is then finished in the cider casks for 3 months, bringing complex fruit notes to the 80-proof expression.

Get your bottle of this light-bodied and fruity Irish whiskey today!

Freshly cut apples are on the nose along with a malty sweetness, vanilla, and oak. The palate is pleasantly sweet and tart with cider, cereal, caramel, as well as a touch of nuttiness and spice. The finish is creamy with spice and malt.