Size750mL Proof92 (46% ABV)
This Irish single-grain whiskey was hand-selected by Jonathan V. Egan. It's a column still whiskey that was matured in ex-bourbon casks for 8 years before being bottled at 92 proof without chill filtration.
Notify me when this product is back in stock. 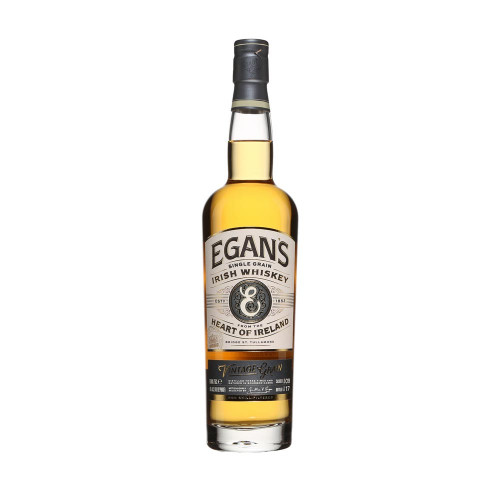 P. & H. Egan was founded by Patrick Egan Sr in 1852 in Tullamore, Ireland. The brand became very successful with its endeavors that included malting, brewing, and bottling. By the late 19th century his sons, Henry and Patrick Jr., expanded the operation into one of the largest and most diverse businesses in the region. Their Tullamore Brewery saw several expansions, as their ale and whiskey gained popularity in Ireland as well as the UK.

Beside the success of its own brands, P. & H. Egan became the bottlers for Guinness, Bass, and Jameson. Over a century later in 2013, the fifth and sixth generation of Egans revamped the family business, propelling the Egan name back into the world of whiskey, starting with the award-winning Egan's Single Malt expression.

Egan's Vintage Grain is a single grain Irish whiskey that was hand-selected by Jonathan V. Egan. The second release from the revived brand was distilled with a column still before spending 8 years in ex-bourbon casks. It is bottled without chill filtration at 92 proof.

Get your bottle of this single-grain whiskey today!

The nose is delicate and light with gentle floral, apple, vanilla, and cereal notes. The palate is equally light with honey, apple, caramel, and baking spices. The finish is gently warming with lingering honey, apple, and oak notes.