Learn more
Size750mL Proof82.6 (41.3% ABV) *Please note that the ABV of this bottle may vary
The majority of this expression's maturation period was spent in ex-bourbon casks. It was split up and transferred into ex-sherry, ex-Port, and ex-Madeira casks for its final 6 months before being combined. This results in a complex, fruity, and soft Irish whiskey that's bottled at 82.6 proof. 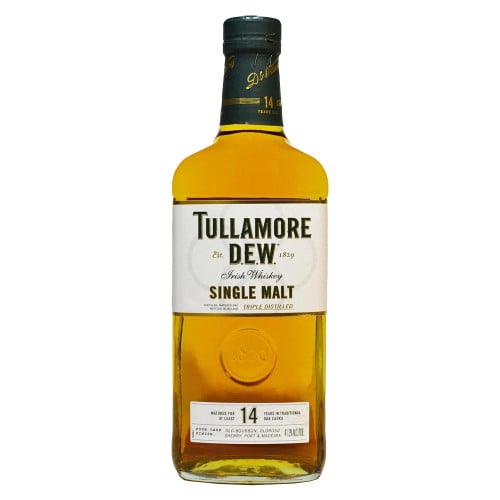 Tullamore DEW Irish Whiskey is made from three different grains, including malted barley, unmalted barley, and corn. Once the grains are harvested, they are milled and mashed with hot water before being fermented in wooden washbacks. During fermentation, the grains' sugars are converted into alcohol, creating a strong yet sour beer called wash. The wash is then triple distilled through three copper-pot stills: a wash still, a low wines still and a pot still. Through each distillation process, the alcohol content and flavors of the whiskey are intensified.

The Tullamore DEW 14 Year Old is a rich and smooth triple-distilled single malt whiskey. It spends 13 and a half years in ex-bourbon casks before being split up and transferred into ex-Sherry, ex-Port, and ex-Madeira casks for another 6 months. After the maturation, the liquids are combined and left for a short time in order for the aromas and flavors to marry. Bottled at 82.6 proof, it's a complex, fruity, and soft Irish whiskey with a complex balance of fruity sweetness, oak, and subtle spice notes.

Grab a bottle of this exquisite Irish whiskey today!

The rich whiskey opens with fruity apple and citrus aromas, as well as honey, vanilla, and cinnamon. The palate is soft, sweet, and equally fruity with additional tropical fruit notes. The finish has a balance of fruit, oak, and spice.