Size750mL Proof92 (46% ABV)
Gold at the 2017 San Francisco World Spirits Competition. An award-winning revival of Ryan’s Beggars Bush Single Malt to celebrate its 100th anniversary. A true Irish whiskey.
Notify me when this product is back in stock. 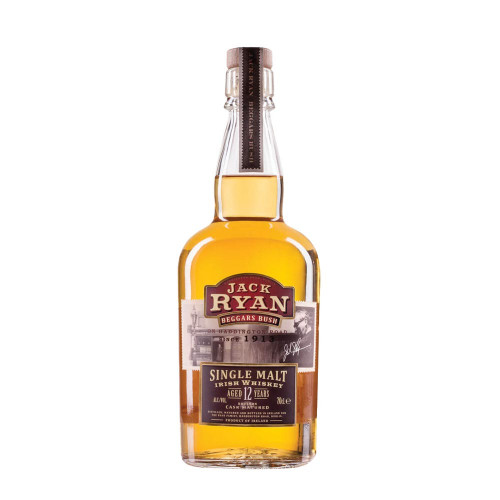 From owning public houses and Dublin’s Beggars Bush pub to farming barley and distilling spirits, their story begins in the 1820s when John Ryan started learning the craft in the Limerick Distillery (later Walker’s). From 1913 to 1946, the family was producing their own Ryan’s Malt at the Dublin Whiskey Distillery until it closed down.

In 2013, Eunan Ryan who grew up in the drinks business and worked at the family-owned Beggars Bush pub – one of Dublin’s oldest existing pubs – since he was 13, decided it was time to celebrate 100th year anniversary of Ryan’s Beggars Bush Single Malt. Ryan’s Malt was revived to offer a strong and authentic Irish whiskey to the world. The centennial release has been accepted with wide critical acclaim and today, Jack Ryan Whiskey Company is planning further small batch premium single malt releases.

The nose offers intense tropical fruit aromas of passion fruit, lemon, pineapple, and orange peel with a hint of cinnamon. The palate is smooth and oily with flavors of oranges, marmalade, classic vanilla flavors, light orchard fruits, and warm spices. The finish is more malty with oaky flavors coming through.