Learn more
Size750mL Proof110 (55% ABV) *Please note that the ABV of this bottle may vary
Only 2,500 cases of this limited edition whiskey, which earned the Gold Medal at the Irish Whiskey Masters Competition in 2013, will ever be made.
Notify me when this product is back in stock. 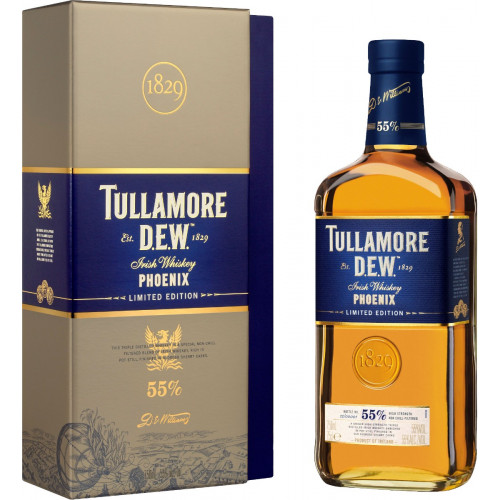 Situated in the Midlands region of Ireland, the city of Tullamore was ruled for centuries by Clan O'Molloy. On May 10, 1785, a hot air balloon crashed into the city and began a fire that destroyed over 100 homes, making Tullamore the site of the world's first known aviation disaster. Following the accident, the city adopted a phoenix (a phoenix is a mythological Greek bird that is reborn after it dies) rising from the ashes as its coat of arms, a symbol of its resilience and recovery.

Tullamore DEW Distillery was founded within 50 years of the accident, and is situated at the very site where the hot air balloon struck a smoking chimney, which started the fire.

Following distillation, the whiskey is matured in traditional oak casks until it reaches its peak flavor. Then, a portion of the whiskey is double-barreled, or finished, for an additional two years in Oloroso Sherry casks. Once the whiskey has been finished, it is bottled at 110 proof without the use of chill filtration.

Tullamore DEW Phoenix Irish Whiskey has a creamy and rich aroma, with hints of vanilla, molasses, toffee, brown sugar and spicy ginger. The aroma gives way to notes of malted barley, cinnamon and woody spices on the palate, which are complemented by a sweet undertone of honey and red fruits. The finish is long and smooth, with a warming touch.

Tullamore DEW Phoenix earned the Gold Medal at the Irish Whiskey Masters Competition in 2013. "Tullamore DEW Phoenix pays homage to the incredible spirit of the people of Tullamore and reaffirms our commitment to the town and its people," says the distillery's brand manager, Cindy Wang.

Only 2,500 cases of this limited edition whiskey will ever be made. Pick one up today!

Creamy and rich aroma, with hints of vanilla, molasses, brown sugar and spicy ginger. Notes of malted barley, cinnamon and woody spices on the palate, which are complemented by a sweet undertone of honey and red fruits. Finish is long and smooth, with a warming touch.