Be the first to review this product
The Walsh Whiskey marks the return of Whiskey distilling to County Carlow for the first time in over 200 years, aiming to bring back the Irish Whiskey in its most traditional form. The Irishman 12-year-old single malt was a Gold winner and Best in Class at the International Spirits Challenge 2013.
Add to Wish List
Notify me when this product is back in stock.

The picturesque Walsh Whiskey marks the return of Whiskey distilling to County Carlow for the first time in over 200 years. With its three specially crafted imported pot stills — built in the legendary Scottish Forsyths — and two, forty plate column stills. They are the only independent Irish Whiskey distillery to produce the three styles of Irish Whiskey — pot still, malt, and grain under one roof, in one still room. Walsh Whiskey has the capacity to produce 650,000 cases of Whiskey per annum.

The Irishman 12-year-old single malt was released in 2013, and was a great success. It is a limited edition, with only 6,000 being made every year. The whiskey is triple distilled and aged in first fill, flame charred bourbon barrels. The Whiskeys that go into the Irishman 12YO are independently sourced, casks hand selected from a Northern Irish distillery. Bottled at 43% ABV this classic single malt has notes of vanilla, cinnamon, and clove on the nose, with a peppery, fruit filled midsection, and a malted oak finish. It was a Gold winner and Best in Class at the International Spirits Challenge 2013.

On the nose the light sweet spicy ex-bourbon notes of vanilla, cinnamon and clove. This is followed by balanced notes of apples and pears, some charred wood and freshly cut hay. On the palate are rich flavors, sweet with vanilla, delicately bolstered by black peppercorns, giving way to a succulent fruity mid-section, fading to a grassy cereal conclusion. The finish is full of barley and oak, with a touch of creamy, dairy fudge and dark chocolate. 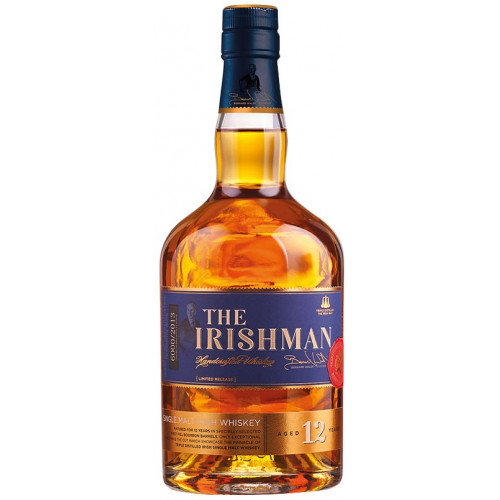