Size750mL Proof100 (50% ABV)
Aged for approximately four years and bottled at 100 proof, this rye whiskey is made by the newest distillery on the Kentucky Bourbon Trail. 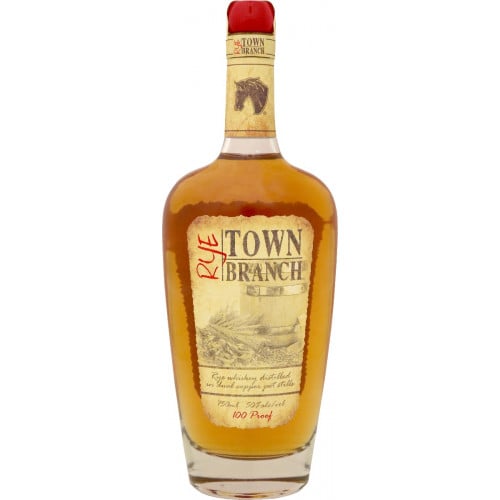 The origins of rye whiskey in the United States date back to colonial Pennsylvania, where early European settlers brought with them the tradition of distilling excess grains from their farms into whiskey. For over a century, the production of rye whiskey centered around Pennsylvania and Maryland, where large numbers of Scottish and Irish immigrants had settled. The popularity of rye whiskey grew steadily among the colonists, however, and when the British blockade of American ports during the American Revolutionary War prevented the importation of rum, rye whiskey became America's drink of choice.

Nearly 100 years after Prohibition, the preferred whiskey of the saloon era is experiencing a resurgence, even in Kentucky, where bourbon still reigns supreme. Made by Town Branch Distillery, the newest distillery on the Kentucky Bourbon Trail, Town Branch Rye Whiskey is made from 55% rye, 30% corn and 15% malted barley. Distilled through dual copper pot stills, the whiskey is then aged for approximately four years before being bottled at 100 proof.

Town Branch Rye Whiskey has a spicy, floral aroma which leads to notes of pepper, oak and vanilla on the palate. The finish is long and complex, with an earthiness accented by notes of caramel and candy corn.

Spicy, floral aroma which leads to notes of pepper, oak and vanilla on the palate. Finish is long and complex, with an earthiness accented by notes of caramel and candy corn.