Learn more
Size750mL Proof92 (46% ABV) *Please note that the ABV of this bottle may vary
Aged for up to 44 years, this single malt whisky pays homage to a master distiller's five decades of experience at the same distillery.
Notify me when this product is back in stock. 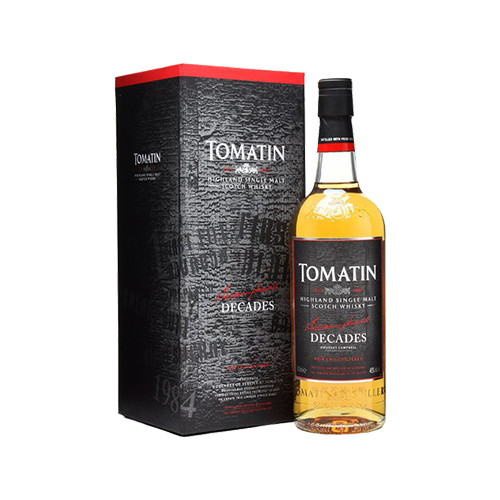 Tomatin Single Malt Scotch Whisky is made from fresh, plump, Scottish barley. After the barley has been harvested, it is mashed and fermented before being distilled twice through Tomatin's copper-pot stills. "The stills have a round, flat shape that gives the whisky a rounder and sweeter flavor profile,"notes Douglas Campbell, Tomatin's Master Distiller. Campbell, who began working at the distillery in the 1960s, joined Tomatin as an accountant, doing clerical work. "After that, the managing director, John McDonald, took me under his wing and gave me the chance to work in different parts of the distillery. I did mashing for three or four years, distilling for a couple of years, worked in the warehouses. Eventually, I was one of the charge hands getting casks ready for dispatch."

Much like Glen Grant's Five Decades, Tomatin Decades Single Malt Scotch Whisky is made in homage to Campbell's over five decades of experience at the distillery. "My father worked here as a cooper," says Campbell, "my wife worked here for 10 years as secretary for the managing director, and my son works here now in the warehouse. I was born in Tomatin, I belong to Tomatin." The whisky is made by marrying together casks of whisky distilled in 1967, 1976, 1984, and 1990, along with a slightly younger, peated Tomatin Single Malt. Each cask was composed of American oak or European oak, and had previously been used to mature bourbon, sherry or Oloroso sherry.

As a result of this marriage, Tomatin Decades has a slightly peaty aroma, with touches of vanilla, leather and stone fruits (particularly peaches). The aroma gives way to a full-body that has notes of raisins, dark chocolate, cherries and berries, and fades into a drying, slightly spicy finish.

Only a select number of Tomatin Decades bottles were allocated to the United States. Pick up one today!

Slightly peaty aroma, with touches of vanilla, leather and stone fruits (particularly peaches). Full-body that has notes of raisins, dark chocolate, cherries and berries, and fades into a drying, slightly spicy finish.