Size750mL Proof84 (42% ABV)
Bottled from a single barrel, this rum is crafted in Newport, Rhode Island in the style of colonial American rums.
Notify me when this product is back in stock. 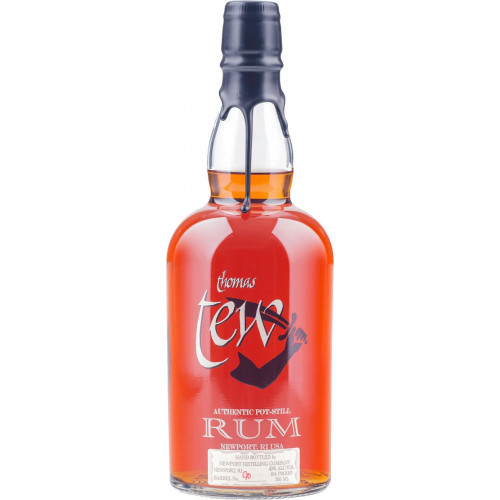 As the sugar trade exploded in the American colonies in the early 18th century, so did the production of rum. In those days, the actual distillation took place in the the colonies themselves — in particular, Newport, Rhode Island, which had twenty-two distilleries operating by 1769 — and the resulting rum, crafted from blackstrap molasses, pot stills and local water, was enjoyed throughout the world. However, mounting economic and political obstacles, such as the Sugar Act of 1764 (which increased the cost of sugar) and British occupation, made rum production more and more difficult, and as whiskey began to grow in favor, Newport’s booming rum industry gradually began to die out.

Newport Distilling Company’s Thomas Tew Rum, which uses the same ingredients and process — blackstrap molasses, pot stills and local water — as rums of the 18th century, is a very close recreation of the Newport rums that were once famous the world over. Aged for years at a time, Thomas Tew Rum is bottled from single barrels, selected one-at-a-time based on their maturity.

Thomas Tew Rum has a dark amber color, with aromas of brown sugar, baking spices and oak. Many of these aromas become even more pronounced on the nose, with additional notes of thick caramel and vanilla. The finish is long and complex, with the full, aged oak character shining through once again.

Pick up a bottle of colonial rum today!

Dark amber color, with aromas of brown sugar, baking spices and oak. These aromas become even more pronounced on the nose, with additional notes of thick caramel and vanilla. Finish is long and complex, with the full, aged oak character shining through once again.