Learn more
Size750mL Proof90 (45% ABV) *Please note that the ABV of this bottle may vary
Privateer Silver Rum earned a score of 93 points from Wine Enthusiast, while Privateer Amber Rum is triple-barreled in three unique types of oak.
Notify me when this product is back in stock. 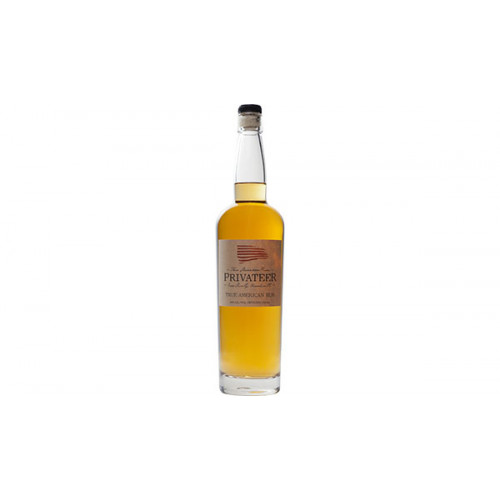 During the American Revolutionary War, the Continental Congress issued privateering licenses, which authorized the captains of American commercial ships to attack vessels belonging to the British fleet. By the end of the war, nearly 55,000 colonists had served aboard privateers and were responsible for the capture of 300 British ships. "My great-great-great-great grandfather was a merchant, rum-distiller and one of the most successful American privateers," says Andrew Cabot, the founder of Privateer Rum. "His fleet totaled more than twenty-five ships and his gritty determination at sea helped us win the war."

Privateer Rum honors Cabot's fearless ancestor and the the rich spirit of independence that embodied the original thirteen colonies.

Privateer Silver Reserve Rum is crafted from cane juice crystals and real brown sugar, which are fermented at Cabot's distillery in Ipswich, Massachusetts. While ordinary rums are fermented for 24 hours at 105°, Privateer Rum is fermented at 78° for six days. "By cool fermenting our sugars," says Cabot, "we allow them to thrive and produce more desirable flavors. Most of the sugar is converted to alcohol in the first 48 hours, but the mingling of the yeast with the sugars after this period gives richness and complexity to the spirit, just as it does in whiskey, wine and beer."

Following fermentation, the rum is double-distilled — first through a copper pot still and then again through a copper plate still. After distillation, the rum is matured in stainless steel tanks for up to six weeks, where it is slowly brought to proof with soft water. Then, Privateer Silver Reserve Rum is bottled by hand. The rum has an aroma of sugar and minerals that give way to notes of light caramel and vanilla frosting. The finish is slightly citrusy, with a touch of lemon and key lime pie.

Privateer True American Amber Rum is crafted from the finest, Grade A molasses and brown sugar. Much as he does with Privateer Silver Rum, Cabot cool ferments the sugars with a proprietary strain of yeast developed specifically for Privateer Rum. Following fermentation and distillation, the rum is brought to 110 proof and matured in new oak casks for 18 months. "We use French oak that contributes flavors of custard and vanilla, American oak that contributes notes of allspice and clove, and Hungarian oak that contributes flavors of tobacco and sandalwood."Then, the rum is double-barreled, or finished, in used casks (the casks were formerly used to mature bourbon, brandy and sherry) that contribute less woody flavors to the rum as it matures, but still round out its flavors and add depth and complexity. After the rum has been finished, barrels are batched together based on their flavor profile and aged a third time in third-use barrels. "We keep the rum at 100 proof during this stage, to minimize the oak influence, because we do not want to add any more flavor. The third use barrels allow the rich oxidative aging we crave to occur without adding oakiness."

Finally, the rum is bottled by hand. The rum has an aroma of red fruits, candied oranges and buttered bread. The palate has notes of tobacco, cedar, oak and light vanilla that lead to a long, spicy finish. Privateer Amber Rum earned four stars from F. Paul Pacult's Spirit Journal.

"We are about purity and transparency," says Cabot. Try two pure rums today!

Silver: Aroma of sugar and minerals that give way to notes of light caramel and vanilla frosting. Finish is slightly citrusy, with a touch of lemons and key lime pie.