This product is available in: CA, DC, NH, NY, WA Unfortunately, we can't ship to PO Boxes and APO addresses.

Size750mL Proof98.9 (49,45% ABV)
Based on the high-rye bourbon from the Barton 1792 Distillery, this 98.9-proof spirit is finished in Port wine casks. It's a part of a newer range of ultra-premium whiskey from the distillery that focuses on finishing the bourbon in choice casks from around the world.

This product is available in: CA, DC, NH, NY, WA Unfortunately, we can't ship to PO Boxes and APO addresses. 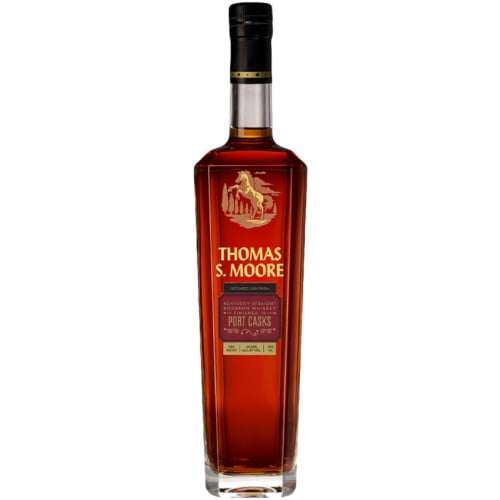 The Thomas S. Moore brand features ultra-premium whiskey that pays tribute to the founder of the Barton 1792 Distillery. It sees the distillery age their high-rye bourbon normally, before it gets finished in choice wine or spirits casks from around the world. The first 3 releases were finished in Port, Chardonnay, and Cabernet Sauvignon wine casks. The Port-finished release is bottled at 98.9 proof and features a soft and sweet taste profile with vanilla and baking spice notes.

Get your bottle of this port-finished bourbon today!

It's a soft and sweet whiskey with dark fruit, oak, and baking spice aromas on the nose. The palate is oaky with dark fruit, cinnamon, clove, and dried fruit notes. The finish is long with a balance of fruit and spice notes.