This product is available in: CA, CT, ND, WA Unfortunately, we can't ship to PO Boxes and APO addresses.

Size750mL Proof86 (43% ABV)
A collaboration between the Irish Boann Distillery and O'hara's brewery. A premium whiskey blend is finished for 6 months in casks that previously held the award-winning beer Imperial Stout for 6 months.
Notify me when this product is back in stock.

This product is available in: CA, CT, ND, WA Unfortunately, we can't ship to PO Boxes and APO addresses. 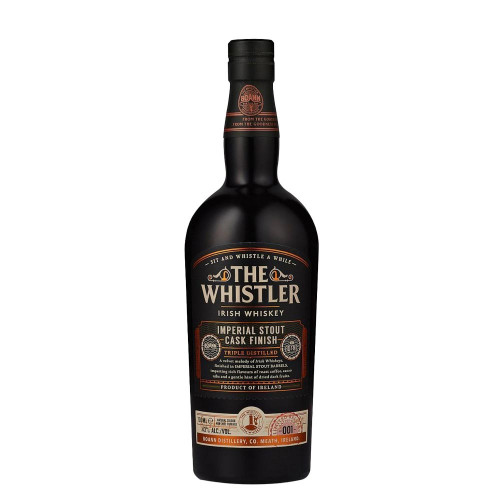 The Whistler Imperial Stout Cask Finish is a limited-edition collaboration between Boann Distillery and O'hara's brewery. First, 250-liter sherry hogshead barrels that formerly held The Whistler 7YO Single Malt are filled with the award-winning Imperial Stout and matured for 6 months. Then, a premium blend of whiskeys – 35% single malt whiskey, 50% wheat whiskey, and 15% grain whiskey, all aged separately in ex-bourbon casks – are married and finished in the same Imperial Stout beer casks for another 6 months. Bottled at 86 proof, it's non-chill filtered and brings creamy dark chocolate, ground bitter coffee, and undertones of caramel on the palate.

An earthy nose. The creamy and smooth palate brings dark chocolate, ground bitter coffee, flaked almonds, and undertones of caramel. The finish is long and complex.