Size750mL Proof80 (40% ABV)
The Tyrconnell Irish Whiskey Single Malt earned 94 points at the Ultimate Spirits Challenge.
Notify me when this product is back in stock. 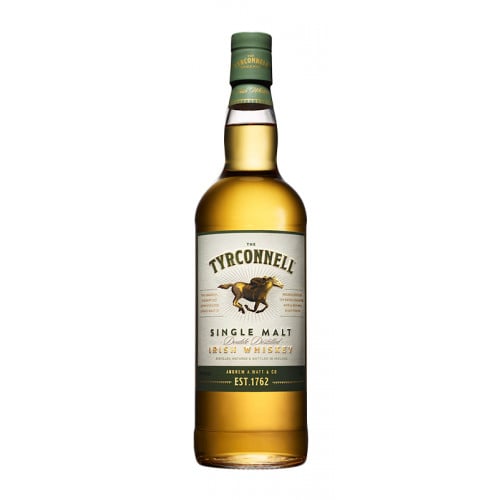 Nearly 800 years ago, the O'Donnell Dynasty ruled an ancient Gaelic kingdom in northwest Ireland called Tyrconnell (Tyrconnell means "The Land of O'Donnell" in ancient Gaelic). In 1876, the family of Andrew Watt entered a horse named "The Tyrconnell" in an Irish horse race known as The National Produce Stakes. Despite the 100-to-1 odds against him, Tyrconnell won the race and the Watt family, which had been producing whiskey since 1762, celebrated by launching the Tyrconnell label.

The Tyrconnell Single Malt Irish Whiskey is made using the finest Irish barley, which is steeped in pure spring water and allowed to germinate. Unlike many Scottish distilleries, Cooley Distillery does not use any smoke during the malting process, resulting in a cleaner taste of the malt and barley. After the barley is malted and mashed, yeast is added to the wort in order to begin fermentation.

The wash is then double distilled in the distillery's copper pot stills — the stills' small size and long necks result in more contact between the whiskey and copper and ultimately produce a more refined and layered spirit. The Tyrconnell Irish Whiskey Single Malt earned 94 points at the Ultimate Spirits Challenge.

Aromas of roasted nuts, nougat, and mild oak precede a palate that is honeyed and rich in texture. The finish brings forth the malt component, allowing a keen graininess to move to the forefront. Drink neat, or on the rocks. Also, adding a reasonable amount of water to the whiskey is an option, as it will allow the nuances and complexity of the whiskey to more clearly present themselves.