Size750mL Proof80 (40% ABV)
This punchy Pogues tribute earned awards at the New York International Spirits Competition and World Whiskies Awards, as well as a Gold medal at the 2017 San Francisco World Spirits Competition.
Notify me when this product is back in stock. 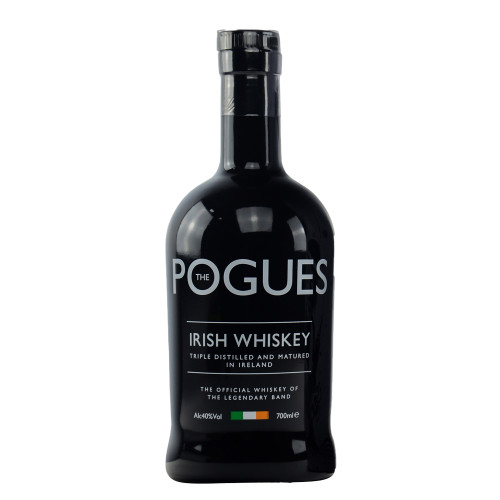 About The Pogues Irish Whiskey

Pogues Irish Whiskey is produced by West Cork Distillers, an Independent distiller of Ireland. Inspired by "The Pogues" band, this whiskey is said to have the highest malt content of any blended Irish whiskey, containing 50% grain and 50% single malt liquid. Developed by renowned distillers Barry Walsh and Frank McHardy, this malty Irish drink has floral malty notes and elements of chocolate and citrus.

"The Celtic punk band, originally named Pogue Mahone (from the Irish Gaelic "póg mo thóin" meaning "kiss my arse") later became known as The Pogues. Formed in 1982 by frontman Shane MacGowan, the band were famed and admired for doing things their own way. Their rebellious nature, inspired use of traditional Irish instruments and poetic, often politically tinged lyrics led them to reach cult status in the 80s and early 90s" (producer).

Pogues Irish whiskey is crafted in small batches, using only barley and spring water from the Emerald Isles. The nose has signature Irish whiskey notes of fresh barley, light honey notes, and a little brown butter. The palate offers few surprises, with lots of toasty, roasted grains, a touch of cloves, and just a little vanilla. This punk rock inspired release earned awards at the New York International Spirits Competition and World Whiskies Awards, as well as a Gold medal at the 2017 San Francisco World Spirits Competition.

Signature Irish whiskey notes of fresh barley, light honey, and a little brown butter. The palate offers few surprises, with lots of toasty, roasted grains, a touch of cloves, and just a little vanilla. The body is very light. The finish is quick, almost absent; what’s there focuses on dusty granary notes.