Caskers Rewards members earn up to 6 store points back when buying this bottle.
Size750mL Proof80 (40% ABV)
This Temple Bar 12-year-old is a single malt special release, traditionally crafted using small copper pot stills. The whiskey was barreled in 2004, in a meticulous handpicked selection of fine oak casks, and matured for 12 years in the cellars of the Temple Bar, before being bottled by the Cleary family.
Notify me when this product is back in stock. 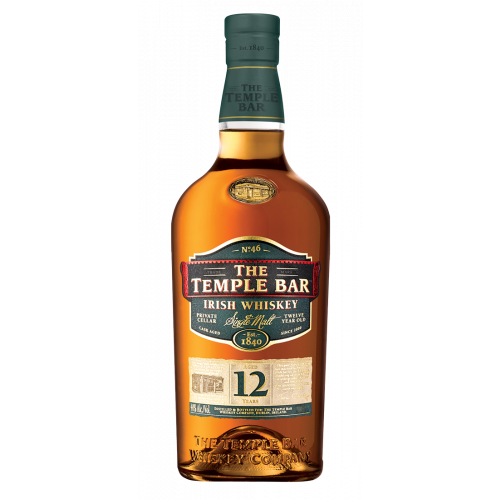 The Iconic Temple Bar was founded in 1840 in Dublin Ireland, on the south bank of the Liffey River, as a wine and spirit merchant shop. One of the most renowned Irish bars in the world, the famous pub is steeped in longstanding traditions of hospitality. The historical Irish landmark was said to have gotten its name from Sir William Temple, a provost of Trinity College, who had built his home and gardens in the area.

Tom Cleary is now the current owner of the Temple Bar, blending and bottling whiskey has been a longstanding tradition in his family. Tom’s grandfather blended and bottled their unique “House Style” Irish whiskey since the 1920s. A special collection of casks were usually rested in the cellar bars, hand selected barrels that were then blended into a signature house style.

Following in this tradition, The Temple Bar has launched their own line of award-winning whiskeys. This Temple Bar 12-year-old is a special release single malt, traditionally crafted using small copper pot stills. The whiskey was barreled in 2004, in a meticulous handpicked selection of fine oak casks, and matured for 12 years in the cellars of the Temple Bar, before being bottled by the Cleary family. The small copper pot stills impart a distinctive character and harmonious flavor onto the spirit, yielding a beautifully aged spirit with delightful notes of honey, citrus, sweet vanilla, and oak.

Pleasing aromas of honey and citrus on the nose. Flavors of spice, oak, and sweet vanilla on the palate. The finish is lingering.