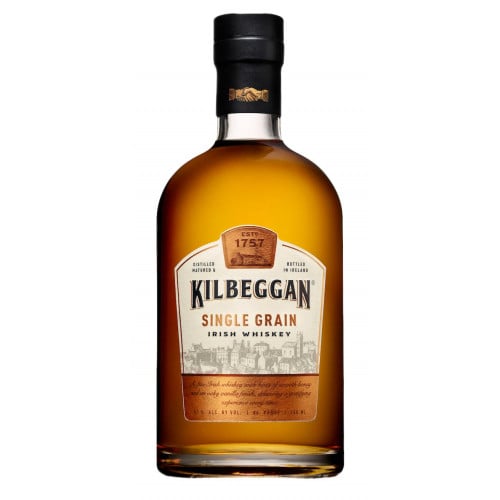 Kilbeggan Distillery, Ireland's oldest operating distillery, was founded by Matthias McManus in 1757 on the banks of the river Brosna, where there is an abundance of the three essential ingredients for making whiskey — water, grains, and turf. McManus passed the distillery down to his son, John, who managed the distillery until the turn of the century when John was executed for his part in a local uprising against English rule.

This Kilbeggan single grain whiskey is twice distilled from 94% corn and 6% malted barley. Made using pure Irish spring water, the resultant wort is transferred to wooden washbacks for fermentation. The fermented liquid is then double-distilled in copper pot stills, which allows the whiskey to retain many of the raw flavors of its ingredients. Incredibly, the second distillation is done through the oldest working pot still in Ireland, which is over 180 years old. Aged in former bourbon casks for at least four years.

On the nose are aromas of caramel, vanilla, grassy notes, oak and leather. The palate echoes the nose with a depth of complexity, and robust spice. The finish is warming with notes of cherries an oak spice.