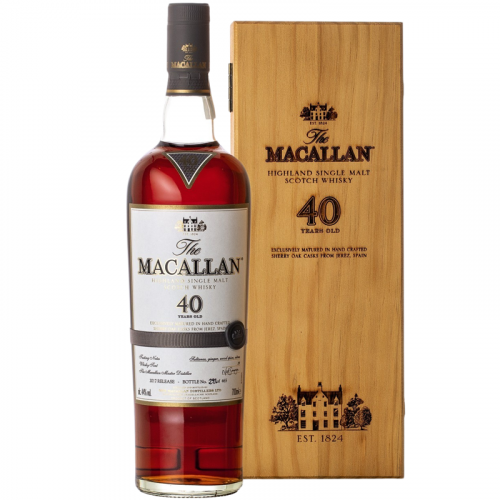 The Macallan Sherry Oak 40 Years Old 2017 is a highly limited release and a testament to The Macallan’s exceptional wood mastery. Exclusively matured in hand-picked Oloroso sherry seasoned oak casks from Jerez, Spain, and crafted from a select combination of three cask types – a European oak sherry butt, a European oak sherry hogshead, and an American oak sherry butt - this precious spirit was laid down to mature for a minimum of 40 years, giving it the extraordinary color, distinctive aromas, flavors, richness, and character that lie at the heart of any Macallan single malt whiskey. This is a rich and complex whisky with a distinctive style and intense character defined by dried fruits, ginger, wood spice, and cinnamon. Released at the end of 2017, only 465 bottles of this release were made available worldwide.

The deep copper color hints at the opulence inside: a rich nose of sultanas, ginger, wood spice, and cinnamon, followed by a complex palate of cinnamon spices, dates, and figs. The finish is long and rich with lingering cinnamon spice.