Learn more
Size750mL Proof91.8 (45.9% ABV) *Please note that the ABV of this bottle may vary
The second oldest The Singleton expression to date is based on their 12-year-old whisky. Initially matured in a combination of port, red wine, Pedro Ximénez, and oloroso sherry casks, the 91.8-proof whisky was finished in French Bordeaux casks. 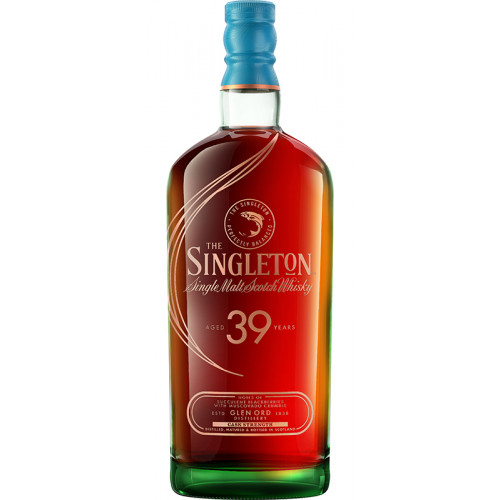 “Glendullan 2” is also a workhorse, putting out 4 million liters of spirit per year, producing several labels. The distillery itself has official bottlings and has been producing the Singleton brand since 2007. A bio plant, which processes the spent lees, was also opened on-site in 2014. The distillery has 3 wash stills with an impressive capacity of 33,700 liters, and 3 spirit stills with 23,800 liters of capacity. They source their unpeated maltings from Diageo's industrial site, and the mashing takes place in a 12-ton mash tun.

This 39-year-old is the second oldest The Singleton release to date. Crafted under the watchful eye of Master Blender Maureen Robinson, the whisky was matured in a combination of port, red wine, Pedro Ximénez, and oloroso sherry casks, before being finished in French Bordeaux casks. Based on the 12-year-old expression, it's a complex and nuanced spirit with notes of fruit, raisin, butterscotch, spice, almond, and orange zest. It's bottled at 91,8 proof and is limited to 1,695 bottles globally.

Get your bottle of the second oldest The Singleton today!

The whisky is complex with aromas of fruit, pastry, raisin, butterscotch, as well as hints of nuts and orange zest. The palate is sweet and creamy with baking spice that carries on through the fruity and gently warming finish.