Learn more
Size750mL Proof87.6 (43.8% ABV) *Please note that the ABV of this bottle may vary
This very special release commemorates Johnnie Walker's 200th anniversary. The whiskies that went into this blend come from 8 distilleries ― including "ghost" ones ― all of which were operational when John Walker started the brand's journey 2 centuries ago.
Notify me when this product is back in stock. 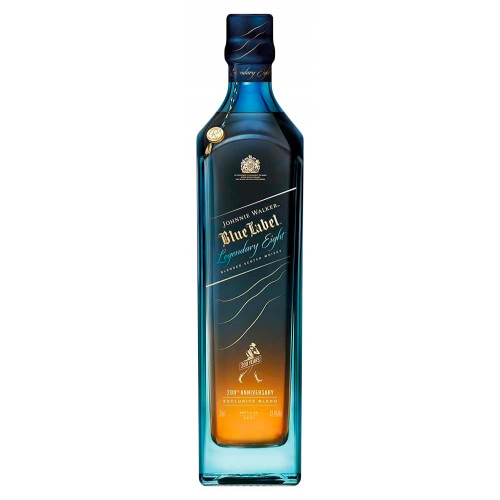 The legalization of the blending of grain and malt whiskies by the Spirits Act of 1860 marked the beginning of the modern blended Scotch whisky. Johnnie Walker's first commercial blend, called Old Highland Whisky, was launched in 1867. Alexander Walker also introduced the brand's signature square bottle and the distinctive slanted label. In 1893, the Walkers acquired the Cardhu distillery and kept expanding through the early 20th century by buying interests in a number of distilleries. This ensured the company a steady supply of whiskies for its blends. By 1909, John's grandsons George and Alexander II had expanded the line, and sold three blended whiskies.

Johnnie Walker is celebrating their 200th anniversary with some very special and limited releases, such as this Blue Label Legendary Eight Blended Scotch. The number 8 refers to the legendary distilleries (including "ghost" distilleries) that its rare components come from. All of these distilleries were in existence when John Walker walked the earth 2 centuries ago. Rich and immensely complex, it's a testament to the skill of Master Blender Jim Beveridge.

Celebrate 200 years of Johnnie Walker with this amazing whisky!

The nose is complex and rich with hints of sea spray, brown sugar, honey, citrus, plenty of fruity notes, as well as a touch of wood and gentle smoke. It's sweet on the palate with honey, stone fruits, and cocoa. The finish has lingering sweet and spicy notes with a touch of smoke.