Learn more
Size750mL Proof92 (46% ABV) *Please note that the ABV of this bottle may vary
Aged for 15 years, this whisky earned a perfect score from Wine Enthusiast.
Notify me when this product is back in stock. 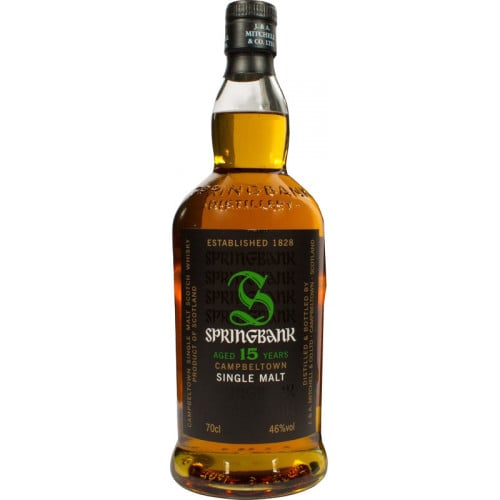 Following distillation, Springbank 15 Year Old Single Malt Scotch Whisky was matured for 15 years in European oak casks that were previously used to mature sherry. The whisky has an aroma of dark chocolate, Christmas cake, almonds, toffee and oak. Notes of figs, marzipan, brazil nuts, raisins and nutmeg dominate the palate, and give way to a finish accented by touches of chewy leather, tobacco and oak.

Springbank 15 Year Old earned a score of 95 points from the Beverage Testing Institute, and a perfect score from Wine Enthusiast.

Aroma of dark chocolate, Christmas cake, almonds, toffee and oak. Notes of figs, marzipan, brazil nuts, raisins and nutmeg dominate the palate, and give way to a finish accented by touches of chewy leather, tobacco and oak.