Learn more
Size750mL Proof88 (44% ABV) *Please note that the ABV of this bottle may vary
A one-in-a-billion Macallan single malt aged fifty years in Spanish ex-sherry casks. The exceptional depth of flavor and rich, thick mouthfeel are an experience reserved for a few lucky souls.
Notify me when this product is back in stock. 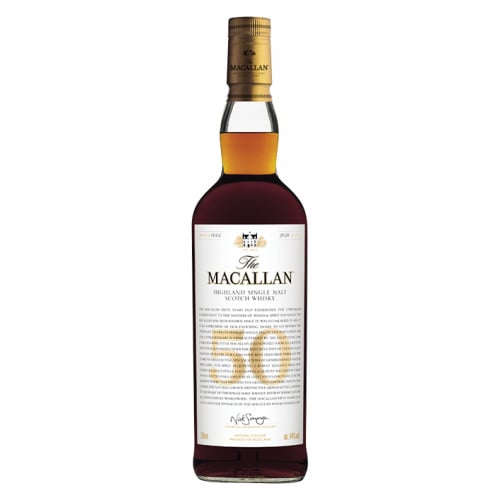 Founded in 1824, The Macallan is one of the “Big 3” single malts in Scotland — the other two are Glenfiddich and Glenlivet. Fortunately, Macallan has achieved this scale without sacrificing quality. A change in UK labeling laws aced them out of their “Speyside” designation. But just because the British Parliament gerrymandered the “official” boundaries doesn’t mean whiskey-lovers have to pay any attention. Macallan single malts are famous for their classic Speyside style and the heavily sherried influence of their core rage.

The Macallan has been creating single malt whisky for so long at such a high volume and such a high level that they have what sports teams call a very “deep bench.” Their incredible inventory of rare, aging single malt gives them the ability to pinpoint flavors and special editions for the refined whisky palate that satisfy a huge, global following. Their achievements are numerous, including setting the record price ever paid at auction for a single bottle of scotch — a 60 year-old bottle of The Macallan Valerio Adami distilled in 1926 that sold for nearly US$1 million just this year.

There are not many distilleries that could manage to produce a fifty-year-old expression at all. The Macallan has made a tradition of it. The specifications are indeed impressive — aged a full fifty years in Spanish ex-sherry casks and bottled at 44% ABV. The resulting spirit delivers a richness of mouthfeel that is almost viscous. One might imagine that you are sipping a light whisky-flavored honey. And such a special experience must be a rare one too. There are only 200 bottles available worldwide this year.

When something is special and rare, people might say that it’s “one-in-a-million.” The Macallan 50 Year Old is truly one in a billion and, perhaps, a once in a lifetime experience.

You’ll be greeted with aromas of earthy spices, ripe currants, and distant smoke. The palate is remarkably thick and rich with notes of English toffee, sweet oak, vanilla, figs, and orange zest yielding to a long, drying finish.