Size700mL Proof86 (43% ABV)
Deep in the forests of Mount Kaikomagatake, there's a precious Suntory-owned Hakushu distillery. It was established in 1973, and they’re hell-bent on making our tastebuds roar in expectation with every dram they make.
Notify me when this product is back in stock. 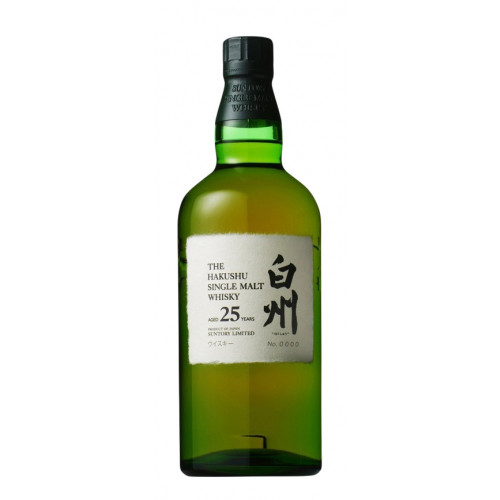 Hakushu’s 25 Year Old Limited Edition is lauded as one of the best whiskies in the world by everyone and their mother. In 2016, it was named The Best Japanese Single Malt by the judges at the WWA. It’s also an insanely limited offering that’s sealed with a five-cord Mizuhiki, the symbol of Japanese hospitality.

In February 1899, Shinjiro Torii — the father of Japanese Whisky — opened a general store in Osaka, Japan, that traded in imported wines. Within a decade, Torii began producing his own sweet grape wine called Akadama Port Wine, which became wildly popular throughout the country. Following World War I, Torri — fascinated by whisky his entire life — decided to expand his business and began constructing the Yamazaki Distillery, Japan's first-ever whiskey distillery.

Fifty years after the construction of the Yamazaki Distillery, Keizo Saji inherited his father's vision and began construction of Suntory's second distillery. Although inspired by traditional Scottish distilleries, both Torii and Saji envisioned a uniquely Japanese approach to distilling whisky. As a result, the Hakushu Distillery is situated amidst the deep forests of Mount Kaikomagatake in Japan's southern Alps and enjoys a unique microclimate as a result of being surrounded by nearly 6,000 varieties of plants and thousand-year-old granite rocks.

Treat yourself to this splendid gem now!

The award-winning sensation starts with a smoky nose with notes of toffee, nutmeg - and rancio, which is usually found in cognac. The palate extends the smokiness and adds a rich sherried palate with hints of raspberries, walnut, rhubarb, and custard. The finish is long, unforgettable, and bittersweet.