Learn more
Size750mL Proof86 (43% ABV) *Please note that the ABV of this bottle may vary
This special vintage earned 92 points from Wine Enthusiast Magazine.
Notify me when this product is back in stock. 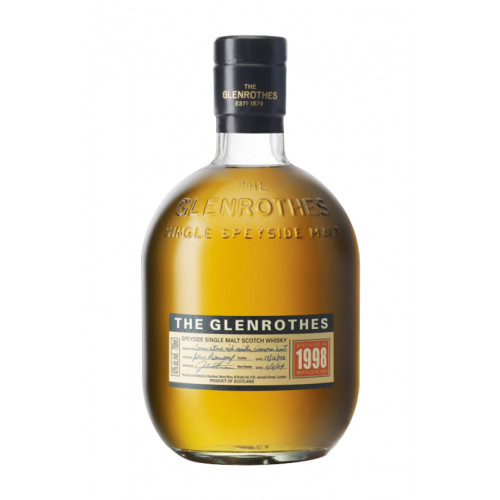 About The Glenrothes 1998 Vintage Scotch Whisky

The Glenrothes Single Malt Scotch Whisky is made from plump, ripe Scottish barley, which is malted and fermented using water sourced from the Ardcanny and Brauchhill springs (the springs are situated adjacent to the distillery). Following fermentation, the grains are twice distilled through the Glenrothes' copper-pot stills. The stills, which were designed and fashioned to be exact replicas of the original stills installed in 1879, are incredibly tall and uniquely shaped, which contributes to the overall light and sweet flavor of the whisky. After distillation, The Glenrothes' stillmen remove the heads and tails of the distillate and preserve only the ""hearts"" for maturation (the hearts comprise less than 20% of the entire distillate). This vintage is latest core expression from The Glenrothes catalogue, following after the previous 1994 vintage. As well as the first bottling made with The Glenrothes Master Distiller Gordon Motion at the helm.

Soft butterscotch aromas on the nose, dark chocolate flavors, notes of clove and cinnamon on the palate.