Size750mL Proof96 (48% ABV)
Drawing on The Glenlivet's past, this expression is inspired by the illicit distilling operation of George Smith. The signature fruity and floral style gets to shine beautifully in this non-chill filtered 96-proof limited-edition expression.
Notify me when this product is back in stock. 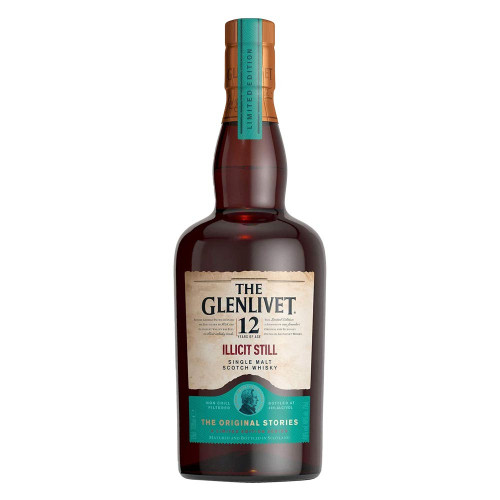 After the barley has been fermented, it is distilled twice — first through Glenlivet's wash still, and then again through Glenlivet's spirits still. Originally designed by George Smith, the copper-pot stills have a unique, lantern-like shape, which encourages contact between the whisky and the copper (the copper strips the whisky of any impurities it may have, and provides for a lighter and more pure flavor profile). In addition, the height of the stills ensures only the lightest vapors are condensed, making for a more delicate and elegant whisky.

The Original Stories lineup of whiskies is a celebration of the brand's passion and originality. These expressions are inspired by George Smith's illegal distilling escapades in the early 1800's as well as his visionary spirit. Bottled at 96 proof without chill filtration, the classic Glenlivet fruity and floral style is able to shine beautifully in this 12-year-old whisky.

The nose opens with ripe orchard fruits, vanilla, honey, as well as some floral and herbal aromas. It's rich and fruity on the palate with vanilla, spice, and a touch of nuttiness. The finish is sweet with vanilla, oak, and citrus lingering.