Caskers Rewards members earn up to 4 store points back when buying this bottle.
Size750mL Proof92 (46% ABV)
The 6th release in Wolfburn's Small Batch series is a combination of two 7-year-old whiskies. The first is lightly-peated and matured in first-fill oloroso sherry butts, the second has spent its 7 years in first-fill bourbon casks. Only 4,800 bottles were produced.
Notify me when this product is back in stock. 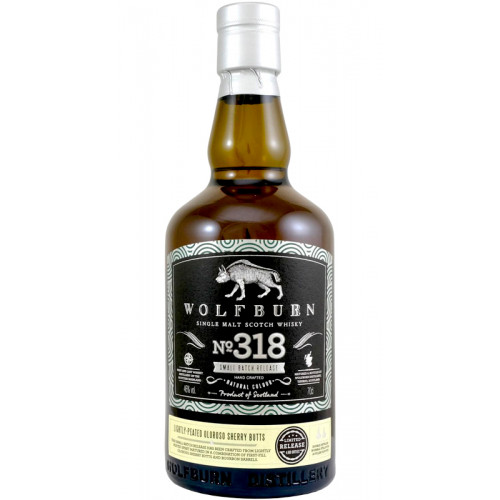 After 150 years of neglect, a group of private investors stumbled upon the old Wolfburn Distillery in May, 2011 — seeing massive potential, the investor began to rebuild the distillery from the ground up. The new Wolfburn Distillery, which, by law, must use water sourced from the same steam used centuries ago, is crafting unpeated malt whisky from a blank canvas through old-fashioned pot-still distillation; no automation, no rush, and a lot of care.

Wolfburn No 318 is the 6th release in their Small Batch series. It's a blend of lightly-peated 7-year-old spirit that was matured in first-fill oloroso sherry butts, and a 7-year-old whisky that was aged in first-fill bourbon casks. Only 4,800 bottles of this well-rounded and deep 92-proof whisky were produced.

Fig, apricot, and gentle peat aromas greet the nose with hints of oak and vanilla in the background. The palate is deep with honey, porridge, cooked apples, and sultanas. There's a touch of warm peat, cinnamon, cloves, and ginger, along with a sherry sweetness. The finish has dried fruit, caramel, and lingering smoky notes.