Be the first to review this product
Matured in three unique types of casks, this whisky earned a score of 94 points from Whisky Advocate.
Add to Wish List
Notify me when this product is back in stock.

In 1815, Donald and Alexander Johnston began leasing nearly 1,000 acres of land on the island of Islay. Their intent was to use the land to raise and sell cattle and as a result, they began growing barley to be used as feed for their livestock. Following a particularly bountiful harvest, the brothers distilled the excess grains they had grown into whisky, and sold it to the inhabitants of the island. Soon thereafter, the brothers found it more profitable to distill whisky rather than raise cattle, and Laphroaig (pronounced La-froyg) Distillery was born.

Laphroaig Single Malt Whisky is one of the most flavorful and intense whiskies made anywhere in the world. During Prohibition, it was one of the few whiskies still legally imported into the United States, as it was considered a medicinal spirit. Laphroaig Single Malt is made from the finest Scottish barley, which is malted at the distillery and smoked over a peat flame. Unlike other distilleries which source peat from the Scottish mainland, the peat used to smoke Laphroaig barley is made from the heather, mosses and lichens of Islay and adds a distinct iodine-like flavor to the whisky. After the barley has been malted and peated, it is fermented before being twice-distilled through Laphroaig's copper-pot stills. The unique stills have an usually flat base and flat surfaces, which contributes to the overall intensity of the whisky.

Following distillation, Laphroaig Triple Wood Single Malt Scotch Whisky is matured in three different types of casks. First, the whisky is matured in ex-bourbon casks composed of American oak. These casks contribute traditional notes of honey, cinnamon and vanilla to the whisky. After its initial maturation, the whisky is double-barreled in quarter casks. Quarter casks were used in the 19th century to transport whisky via horse or mule (the animals could not carry the weight of traditional casks). As a result of their small size, the quarter casks add bold notes of oak and woody spices to the whisky. Finally, Laphroaig Triple Wood is matured in European oak casks that were previously used to mature Oloroso Sherry. The sherry casks contribute a rounded sweetness to the whisky, along with hints of red fruits, citrus and leather. Following maturation, the whisky is bottled without the use of chill filtration.

Intense, peaty aroma with hints of caramel, raisins and prunes. Notes of honey, vanilla, buttered biscuits, cinnamon and peat on the palate. Touches of burnt sugar, caramel and toasted almonds. Finish is bold and long, with notes of peat, salty tang and red fruits. 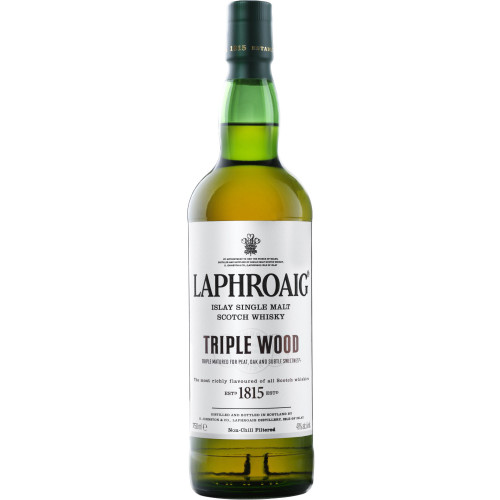